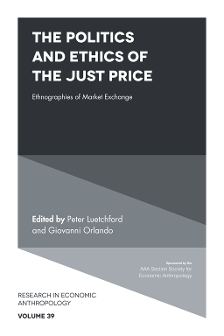 THE POLITICS AND ETHICS OF THE JUST PRICE

THE POLITICS AND ETHICS OF THE JUST PRICE: ETHNOGRAPHIES OF MARKET EXCHANGE

Peter Luetchford is Senior Lecturer at the University of Sussex, UK. He has carried out fieldwork in Costa Rica, Spain and the UK, and published on fair trade, ethical consumption and political cultures of food. He is currently researching historical experiences and practices of work and crisis in Andalusia, Spain.

Giovanni Orlando is Marie Curie Fellow at the University of Turin, Italy. He has done research and written on aspects of the Italian food economy, especially organic and fair trade foods, in both the north and the south of the country. He is also interested in labour movements and industrial democracy.

James G. Carrier (University of Indiana, USA/Max Planck Institute for Social Anthropology, Germany) has done research and written on aspects of economy in Papua New Guinea, the United States and the United Kingdom. His publications include Gifts and Commodities: Exchange and Western Capitalism since 1700, Meanings of the Market, A Handbook of Economic Anthropology and Anthropologies of Class (with Don Kalb).

Demet Ş. Dinler (University of Sussex, UK) is Helena Normanton Research Fellow in International Development. Her research interests include markets, the political economy of development, global supply chains, solidarity economies, working-class and other forms of organising labour. After a multi-sited ethnography of the recycling market, she currently does research on the cut flower sector in Turkey.

Jeff Pratt (University of Sussex, UK) has since 1980 published studies of Cold War ideology, Catholic practice, rural transformations, political movements in Southern Europe, multiculturalism and racism in Italy, and alternative food movements. His ethnographic research has concentrated on Tuscany, with a minor role in a more recent project in Andalusia.

Rebecca Prentice (University of Sussex, UK) has been researching the compensation paid to survivors of the Rana Plaza garment factory collapse in Bangladesh since 2016. Her previous research led to the book Thiefing a Chance: Factory Work, Illicit Labor, and Neoliberal Subjectivities in Trinidad, which won the Society for the Anthropology of Work Book Prize.

Santiago Ripoll (University of Sussex, UK) engages in interdisciplinary research to understand the impact of the restructuring of food systems. His doctoral fieldwork explored Nicaraguan small-scale agriculture and the role of farmer moral and political economies in shaping market exchanges. He has recently undertaken participatory policy research on Nicaraguan and UK food systems.

Lale Yalçın-Heckmann (Max Planck Institute for Social Anthropology, Germany) studied anthropology at the London School of Economics. She has carried out research on Kurds in Turkey, Islam in Europe and Turkish migrant communities, and on privatization and agrarian property in Azerbaijan. She is currently Senior Researcher and Coordinator of the ERC Project “Realising Eurasia” at Max Planck in Halle.

This volume of Research in Economic Anthropology (REA) is fruit of a panel the co-editors convened at the 2016 biennial meeting of the European Association of Social Anthropologists (EASA), held in Milan, Italy. The title of that panel, Just Prices: Moral Economic Legacies and New Struggles over Value, attracted interest, and the event itself initiated the debates you now see in print. It was at the conference that we first discussed the possibility of turning the collection of papers into an edited volume, or special issue. We would therefore, in the first instance, like to thank the participants in our panel, some of whom have provided contributions to this publication.

Following the EASA meeting, the editors continued to mull over the themes and ideas sparked by the panel in a series of encounters, meetings and through email conversations. We also contacted Emerald, who had produced an earlier volume edited by de Neve, Luetchford, Pratt, and Wood, entitled Hidden Hands in the Market: Ethnographies of Fair Trade, Ethical Consumption, and Corporate Social Responsibility (REA vol. 28). This previous publication is based around the work of a cluster of anthropologists working at the University of Sussex. While this is not a companion work, the content of this volume can be seen as a contribution to debates and research agendas pursued by scholars working at Sussex on the social anthropology of global economies, with a special focus on global capitalisms and their alternatives. These scholars include Geert de Neve, Peter Luetchford, Jeff Pratt, Becky Prentice and Dinah Rajak amongst others.

Many people have facilitated the production of this volume. We would like to thank the series editor, Donald Wood, for responding so positively to the initial proposal and for his timely interventions, as well as Philippa Grand, Rachel Ward, Victoria Bunce and Emma Stevenson at Emerald. The volume would never have seen the light of day without their enthusiasm, support and efficiency. We especially acknowledge their patience with what became a more extended timetable than any one of us would have liked. Our thanks also go to the 16 reviewers who gave their time under what seems to be an ever more pressing academic environment. Although they must perforce remain anonymous, we gratefully acknowledge their acute insights and critical commentaries on the substantive chapters. They were hugely helpful to the contributors in the revision process. Jeff Pratt played a key advisory role in developing the volume, and James Carrier prompted us to think more carefully and deeply about the issues and content.

From this, the reader may surmise that this volume has long and multi-stranded antecedents, though not nearly so protracted as the issue of just prices upon which it focuses. We are consequently grateful and indebted to friends and colleagues, and above all to those many scholars down the ages who have tussled with the intractable problem of the just price. If this volume makes some small contribution to those debates, we will be more than satisfied.

Prelims
Introduction – Toward an Anthropology of the Just Price: History, Ethnography, and Critique
Market, Morality and (Just) Price: The Case of the Recycling Economy in Turkey
When The Big Ones Abandon the Marketplace: Morals and Politics of Price in Equatorial Guinea
Pecunia non olet but Does Rose Money Smell? On Rose Oil Prices and Moral Economy in Isparta, Turkey
What’s in a Just Price? Challenging Values at an Organic Cooperative in Southern Spain
Market Relations as Social Relations: Prices and the Moral Economy of Corn and Bean Trading in Rural Nicaragua
Tuscan Values
Just Compensation? The Price of Death and Injury after the Rana Plaza Garment Factory Collapse
Practicing the Just Price: Fair Trade and the Limits of Ethical Consumption in the Global North
Afterword
Index