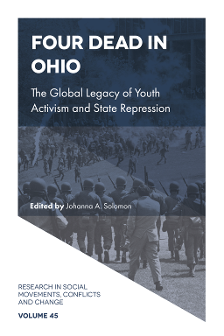 Associate Professor, Department of Sociology and Anthropology, The Hebrew University of Jerusalem

Chair of the Department of Conflict Resolution, Human Security, and Global Governance; McCormack Graduate School and Executive Director of the Center for Peace, Democracy, and Development, University of Massachusetts Boston

Four Dead in Ohio: The Global Legacy of Youth Activism and State Repression

Elizabeth W. Corrie is an Associate Professor in the Practice of Youth Education and Peacebuilding and Director of the Program in Religious Education at Candler School of Theology, Emory University, in Atlanta, Georgia. Her research was supported by a grant from the Louisville Institute in 2019–2020.

Susan Cushman is a Professor of English at Nassau Community College where she also teaches courses in Gender Studies and Peace Studies. She was a guest lecturer in the Hofstra Peace Fellows program in 2016.

Jennifer Earl is a Professor of Sociology and Government and Public Policy (by courtesy) at the University of Arizona, where she studies social movements, information technologies, and the sociology of law, with research emphases on youth activism, Internet activism, social movement repression, and legal change.

Thomas Elliott is a Senior Data Scientist at GitHub. He has his PhD in Sociology from the University of California, Irvine, where he studied the cultural consequences of social movements. His work has appeared in Social Forces, Mobilization, Research in Social Movements, Conflicts, and Change, and New Media and Society.

Andrea Libresco is a Professor of Social Studies Education, Head of the Minors in Civic Engagement and Peace and Conflict Studies, Co-coordinator of Peace Fellows, and Director of the Institute for Peace Studies at Hofstra University. Books include: Every Book is a Social Studies Book and Peace Lessons from Around the World.

Margaret Melkonian is a Director of the LI Alliance for Peaceful Alternatives, Downstate Chair of Peace Action NYS, and Member of the Pax Christi LI Council. She co-coordinated the Peace Fellows Program at Hofstra University and was the recipient of the 2007 Gandhi, King, Ikeda Peace Award from Morehouse College.

Sansom Milton is a Senior Research Fellow at the Center for Conflict and Humanitarian Studies (Doha, Qatar). He previously served as a Research Fellow at the Post-war Reconstruction and Development Unit at the University of York. His book Higher Education and Post-Conflict Recovery was published by Palgrave Macmillan in 2018.

Eric J. Morgan is an Associate Professor of Democracy and Justice Studies at the University of Wisconsin-Green Bay, where he teaches courses on Modern US and African History. His scholarship has been featured in, among other publications: Diplomatic History, The International Journal of the History of Sport, Diplomacy & Statecraft, The History Teacher, Enterprise & Society, Peace & Change, and the Dictionary of African Biography.

Soon Seok Park received his PhD in Sociology from Purdue University. He is currently a Lecturer in the Department of Sociology at Chung-Ang University in South Korea. His interests include social movements, political economy, and social change. His work also has appeared in Social Movement Studies, Sociological Perspectives, and Sociological Focus.

E. Timothy Smith is a Professor of History at Barry University in Miami, Florida. He received his PhD from Kent State University and has published on US foreign policy during the Cold War and on the involvement of private voluntary organizations' assistance to the developing world during the Cold War.

Gabriela González Vaillant is Professor at the Social Science University (Universidad de la República) and the Catholic University at Montevideo, Uruguay. She is also a researcher and active member of the National Research and Innovation Agency (ANII). She has undertaken numerous investigations in the field of political sociology, youth social movements, education, memory, and civic participation. She received her PhD in Sociology from Stony Brook University (SUNY).

Sophia Wilson is an Associate Professor of Political Science at Southern Illinois University Edwardsville. She is a former Shklar Fellow and Lecturer at the Harvard Ukrainian Research Institute and a Jerome Hall Postdoctoral Fellow at the Center for Law, Society and Culture at the Indiana University Maurer School of Law.

This volume comes out of an international conference held at Kent State University on the Semicentennial of the occupation and shooting of students by the Ohio National Guard during a demonstration against the US wars in Vietnam and Cambodia, “Commemorating Violent Conflicts and Building Sustainable Peace.” The National Guard shooting of four white students on May 4, 1970, captured the American imagination. These deaths of unarmed protesters came to symbolize the divisions in the United States – both generational and political. The incident was memorialized in more than a dozen songs and plays, focused on in at least seven documentaries, and fictionalized in numerous novels, poems, comics, films, and television series. Numerous historical, journalist, and social science texts cover the lead-up, investigate what happened, and examine the memory of these shootings.

The Kent State shooting was not the first nor the last of such killings of students by state officers during this tumultuous period of heightened activism in the United States. Government information suppression and racism led to the near erasure of government shooting of students at historically Black colleges, such as the Orangeburg, South Carolina massacre and the Jackson State College, Mississippi, killings. The role of race in collective memory processes here are similar to the way that the 1964 Freedom Summer deaths of white and Black Civil Rights activists attracted attention during a time where the slayings of Black activists by whites attracted little attention. Similarly, the Kent State shootings are more commonly discussed in social movement texts than the much bloodier Corpus Christi Massacre in 1971 and the state infiltration of student movements during Mexican Dirty War. Thus, the editor of this Volume, Johanna A. Solomon, rightfully surmised that we do not need another book that interrogates the actions at Kent State related to the May 4th killings. Rather, this volume illuminates numerous other incidents of state suppression and/or student activism around the globe.

With many thanks to the editorial assistance of Kate Croteau.

Prelims
Introduction
Section I Student and Youth Movements
To Thread the Conscience: Michigan State University and the Anti-apartheid Movement
Fear and Loathing: The Rise of Ephebiphobia and Its Implications for Youth Activism
Talking with or Talking at Young Activists? Mediated Youth Engagement in Web-accessible Spaces
Peace Fellows: Building and Institutionalizing a Visible Peace Community on Campus
Section II Responses to Repression
The Morphology of Repression: Dialectics between Chilean Students and State Force Actions
Universities in Post-2003 Iraq: Coalition and Iraqi Responses to Violence and Insecurity
The Ukrainian Revolution: Repression, Interpretation, and Dissent
Section III Memory and Commemoration
Remembering Gwangju: Memory Work in the South Korean Democracy Movement, 1980–1987
Tent City 1977 and the Kent State Gym Annex
Index