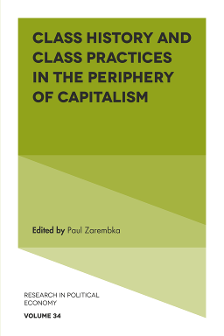 CLASS HISTORY AND CLASS PRACTICES IN THE PERIPHERY OF CAPITALISM

CLASS HISTORY AND CLASS PRACTICES IN THE PERIPHERY OF CAPITALISM

Paul Zarembka holds a PhD in Economics from the University of Wisconsin, Madison, being trained in the neoclassical approach to economic development and in econometrics. He published Toward a Theory of Economic Development (1972) and edited Frontiers in Econometrics (1974). After an appointment at the University of California, Berkeley, Paul joined the Department of Economics at the State University of New York at Buffalo in 1973, becoming full Professor in 1976. While a Researcher at the World Employment Program of the International Labor Organization in Geneva, he studied Marx’s political economy and began in 1977 as Series Editor of Research in Political Economy. Committed to Marxist political economy, yet aware of many problems, he is currently working on a book tentatively entitled “Marx’s Revolution in Political Economy: Evolving Struggle, Then and Now.” Connected with his effort to develop theory he edited The Hidden History of 9-11 (2nd paperback edition, 2008), convinced that the US event deserves normal academic consideration while starting from the fact that the US Commission report did not even attempt to establish identities of alleged hijackers on the planes. Paul has been a long-term union activist on his campus, serving previously as President and currently as Grievance Officer for Academics.

Carlos Antonio Aguirre Rojas is full-time Researcher in the Instituto de Investigaciones Sociales at the Universidad Nacional Autónoma de México. He is a Specialist in the field of the critical history of historiography in the nineteenth, twentieth, and twenty-first centuries. He is currently working on the new antisystemic movements in Mexico and Latin America. His books and articles are translated into 13 languages and published in 26 different countries.

Patrick Bond is Distinguished Professor of Political Economy at the University of the Witwatersrand in Johannesburg. His books include Elite Transition: From Apartheid to Neoliberalism in South Africa (Pluto Press, 2014), Politics of Climate Justice (University of KwaZulu-Natal Press, 2012), Looting Africa (Zed Books, 2006), and Against Global Apartheid (University of Cape Town Press, 2003). He is currently engaged in praxis research in relation to mega-projects, inequality, water and climate, and the Brazil–Russia–India–China–South Africa bloc.

Nicolás Iñigo Carrera is a Principal Researcher of the National Council for Scientific Research, and Researcher at the University of Buenos Aires and for the Research Program on the Motion of Argentine Society (PIMSA). He was a Professor at the Universidad Nacional del Centro de la Provincia de Buenos Aires (1993–2014) and Universidad de Buenos Aires (2002–2017), and a Visiting Professor at several universities. He has published 12 books, most recently, La otra estrategia (2016), La estrategia de la clase obrera en los orígenes del peronismo (2018) and Agustín Tosco. La clase revolucionaria (2018).

Daniel Gaido received his PhD from Haifa University in 2000 and is a Researcher at the National Research Council (CONICET), Argentina. He is the Author of The Formative Period of American Capitalism (Routledge, 2006) and Co-editor, with Richard B. Day, of Witnesses to Permanent Revolution: The Documentary Record (Brill, 2009), Discovering Imperialism: Social Democracy to World War I (Brill, 2012), and Responses to Marx’s ‘Capital’: From Rudolf Hilferding to Isaak Illich Rubin (Brill, 2017).

Efe Can Gürcan is a Research Associate at the University of Manitoba’s Geopolitical Economy Research Group and Lecturer in International Studies at Simon Fraser University. He has published extensively on international development, international conflict and cooperation, and social movements, with a geographical focus on Latin America and the Middle East. His third and latest book is Multipolarization, South-South Cooperation and the Rise of Post-Hegemonic Governance (Routledge, 2019).

Mariana Mortágua received her PhD in Economics from SOAS (UK) in 2019. She has published several coauthored articles and books on the Portuguese and European crises, including in the Review of Keynesian Economics. Her current research focuses on the evolution of ownership and corporate structures in Portugal and its macroeconomic outcomes. Other research interests include Kaleckian and post-Keynesian theories of stagnation and investment.

Darío Scattolini is a Doctoral Candidate in History at the National University of Córdoba (UNC) and a Research Trainee at the National Scientific and Technical Research Council (CONICET), Argentina. His doctoral research focuses on Marxian theories of crises in the context of the Second International. He has coauthored with Manuel Quiroga Soto the article “Teoría y política de Otto Bauer sobre el imperialismo y las crisis (1904-1914)” (Izquierdas, 2016).

James D. White is Honorary Professor in the Department of Central and East European Studies at the University of Glasgow, Scotland. He is the author of Red Hamlet: The Life and Ideas of Alexander Bogdanov (2018), Marx and Russia: The Fate of a Doctrine (2018), Lenin: The Practice and Theory of Revolution (2001), Karl Marx and the Intellectual Origins of Dialectical Materialism (1996), and The Russian Revolution 1917-1921 (1994).

This volume focuses upon advancing understanding of societies outside the core capitalist countries and deepening knowledge of resistances in the periphery, consistent with utilizing a class analysis. Post-World War II scholars moved to theorize the distinction between the core – the center of capitalism – and peripheral countries, often with an added distinction to include the semi-peripheral. Perhaps the World Systems approach of Immanuel Wallerstein is most responsible for the ease with which the term periphery is now utilized. I myself appropriated it 40 years ago in the second issue of this Research (i.e., “Accumulation of Capital in the Periphery,” 1979), an outcome of research work at the World Employment Program, International Labor Organization in Geneva. By then, the concept of a capitalist periphery did not need to be described, nor did the idea need much elaboration that surplus value is transferred from the periphery to the core, even while surplus value is also directly appropriated from workers in the core.

Of course, the periphery is so diverse that even so stating seems pointless. Resistances are advancing against the cruelties in so many dimensions. Chapters in this volume describe specificities for Russia, Portugal, Argentina, and Mexico as well as broader perspectives on post-hegemonic Latin America and Asia generally, detailed analyzes of resistances across Africa, and the deeper meaning of neozapatismo for promoting a shift in the entire terrain of discussion. A different set of authors would be offering quite different historical perspectives and perhaps focusing upon other class practices.

The archival translation of Karl Kautsky on crises offered here is something different. Sometimes important historical works have never been translated out of their original, and research is thereby impeded. That was certainly the case when Nikolai Sieber had never been translated from Russian, although Marx himself had uniquely praised Sieber in his Afterword for the second German edition for Sieber’s understanding of Capital. The Research then offered two translations, in Volume 19 (2001) and Volume 27 (2011). Kautsky’s work translated here was more widely known, but still untranslated from the German while deserving to be.

It is appropriate to state that a core/periphery distinction was not made by Marx, yet it can be shown that he was not so far away from the distinction. And the history of Marx’s own work suggests that he was closer to this topic than presentations of his work seem to suggest. That is, Marx developed awareness that historical developments are much more complicated than in his original conceptions, resulting in his intense interest in Russian society, aiding by learning Russian. Marx’s study regarding Russian development is described by James White in the first chapter of this volume, while also showing how Marxist political economy subsequently experienced deviation from Marx himself through Engels, Plekanov, and Lenin.

I believe the initiation of the deviation from Marx’s own perceptions can be proven. Although the entire second German edition and most parts of French edition of Capital were prepared more or less simultaneously in Spring 1872, the French Parts VII and VIII of Volume I were prepared in early 1875. Thus, Marx had almost three years to reconsider and revise his presentation of accumulation of capital. In the French, the chapter “The Secret of Primitive Accumulation” now begins a new Part VIII. More importantly, he delimits his discussion only to Western Europe and circumscribes it considerably, 1 compared to the second German edition. Russia, India, China, etc. are not to be offered for inclusion. Although Engels’ third and fourth German editions of Volume I included most preceding changes from the French within Marx’s introductory presentation to the topic, Engels stops at making this last change, also failing to provide the new structure of Volume I explicitly desired. If Marx had lived somewhat longer, we would have had his own third edition.

In 1887, Engels supervised and published the first English edition, as translated by Samuel Moore and Edward Aveling. This English edition did have the divisions of the French, but did not have the delimitation to Western Europe explicitly desired by Marx. Engels in 1890 edited and published the fourth German edition, yet still without recognition of either of Marx’s desires in these regards. To this day, anyone reading any German edition of Volume I is reading within a different structure than the English reader, and all German and English editions fail to include Marx’s delimitation to Western Europe. These failures carry over in widespread fashion for editions in other languages, including, astonishingly, even for the modern French edited by Jean-Pierre Lefebvre. England is presented as the “classic form” of expropriations of the peasant from the soil, only having differing aspects and phases in disparate countries. There is no delimitation to Western Europe that Marx now desired, following the change he already made in the French edition. Why Engels behaved so can be for another occasion, but the main message is that all of us have a lot to study and apprehend from all corners of the Earth we habit.

Expropriation, Marx now says, “has been carried out in a radical manner only in England; therefore this country will necessarily play the leading role in our sketch. But all the countries in Western Europe are going through the same development, although in accordance with the particular environment it changes its local color, or confines itself to a narrower sphere, or shows a less pronounced character, or follows a different order of succession.”