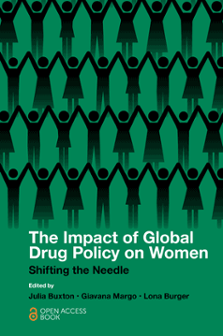 These works are published under the Creative Commons Attribution (CC BY 4.0) licence. Anyone may reproduce, distribute, translate and create derivative works of these works (for both commercial and non-commercial purposes), subject to full attribution to the original publication and authors. The full terms of this licence may be seen at http://creativecommons.org/licences/by/4.0/legalcode

Lili is a campesina woman in her 40s. For 20 years, she has lived in Putumayo, one of Colombia’s principal regions of coca cultivation in the Andean-Amazonian area bordering Ecuador. She is a smiling and tough woman who has affectionately earned the title of la madre de todos (the mother of all). A victim of the armed conflict, she has lost two of her children in the context of the war. Today, she is one of the most important social leaders working in defence of the territory, human rights and the substitution of coca cultivation established in the Final Peace Agreement signed between the Colombian State and the former Revolutionary Armed Forces of Colombia – People’s Army (Fuerzas Armadas Revolucionarias de Colombia – Ejército del Pueblo, FARC–EP). Like her, thousands of peasant women have demanded recognition of the peasant women’s contribution to the development of territories forgotten by the State but built by their communities’ hard work.

In Colombia, coca leaf production has a woman’s face. Women do not just take care of homes but they are also day labourers or gatherers, farmers, cookers and other tasks related to coca cultivation. This phenomenon in which a great percentage of women are responsible not only for the crops but also for the coca grower households has a basic explanation: coca cultivation takes place within the context of the armed conflict, a war in which many women were widowed. So, in the most inhospitable corners of the country, women have assumed the challenge of the social reconstruction of their communities. Hence, any proposal to overcome the scourge of drugs in Colombia must contemplate the ‘gender approach,’ as indicated by the Final Peace Agreement, recognising the important role that women have played in the development of the regions.

Maria is 54 years old and was born in the Department of Caqueta but has lived for more than 20 years on the banks of a beautiful river in the Department of Meta. With a black complexion and a strong voice of almost musical laughter, she is cheerful despite having a difficult life history. She tells her story with her eyes, almost as if awaking her past, about how a paramilitary raid in 1998 left her without a father, without a husband and without two of her brothers. She remembers how the women of her house (her mother, her two sisters and herself) dried their tears of loss and tended to their small cocoa and banana farm. They sold the cocoa for very few pesos and when confronted with the difficult situation in which they lived, they began to grow coca. It was the only crop that enabled them to cover household expenses for their seven young children.

She tells of how the four women of the house undertook all cultivation-related activities. They obtained coca seeds at a time people said it was the most profitable. They sowed and tended the crop. She states that for the farmer, it is more profitable because many times the buyer comes to the door of the farm to buy the coca paste. If they sow another agricultural product such as banana, they would have to pay the transportation by river and land until they reach the nearest village, without guarantee that the banana can be sold at a fair price. She says that they do not grow coca to harm humanity but because the State has never looked at the peasants as citizens, but as criminals. She adds:

If the Colombian state invests in the countryside and in peasant production many things would change. The Final Peace Agreement must be fulfilled. In point 4, it talks about replacing coca not only by replacing it with other crops but by guaranteeing the ownership of the land, health, education and routes to commercialize our products. If these are not fulfilled, people are going to grow coca again and this will be a never-ending story.

They insist that behind every hectare of coca cultivated there are women and men trying to overcome difficult conditions of poverty and exclusion. In the framework of the National Comprehensive Program for the Substitution of Illicit Crops (Programa de Sustitución Integral de Cultivos Ilícitos – PNIS) created by the Final Peace Agreement, tens of thousands of families have voluntarily eradicated their crops as a sign of their willingness to overcome the illicit production of coca. Once again they have placed their confidence in the Colombian state to move towards other productive models and guarantee rights and public goods in the territories of coca production.

Thousands of Colombian peasant women plough the land and are dedicated to educating those who will inherit the land. They believe that the Final Peace Agreement is a window of opportunity to generate territorial development. These women promote the empowerment of other women and they are organised in a concerted manner not only for the substitution of crops considered illicit but also to defend the territories from other extractive economies. The panorama has been very difficult. Those who lead these processes are being persecuted, threatened and killed. Within this group, there are also Afro-Colombian women, indigenous women and women belonging to the LGBTI population.

However, the social movement of peasant women is still vibrant. These women are the ones that build the country. In a Colombia that continues to dispute the concepts of war and peace, they are raising their voice to say that they do not want to continue giving birth to children to fight in civil conflict, that they are willing to contribute to the construction of a viable country for all its citizens. They are leaders but they are also mothers, daughters, cousins, neighbours, and friends. They insist that peace will not be possible without taking into consideration the women of rural Colombia, that Colombia has the potential to be a pantry of agricultural products and a development pole of the country.

Many are the stories of courageous women coca growers. They recognise that coca production in Colombia is an enclave economy. Many of them have made their way in the social struggles led mainly by men, to become protagonists of the peacebuilding process. Here they are, ‘las empoderadas’, the empowered, those who wake up every morning to work for a country of peace and social justice.

Prelims
Introduction
Chapter 1: International Drug Policy in Context
Chapter 2: Gendering Drug Policy
Chapter 3: Women and the Politics of Pleasure in Critical Drug Studies
Chapter 4: Fiona’s Story
Chapter 5: Nexus of Risk: The Co-occurring Problems of Gender-based Violence, HIV and Drug Use Among Women and Adolescent Girls
Chapter 6: Risk Behaviours Among Older Women Who Use Drugs
Chapter 7: Women Who Use Drugs and Mental Health
Chapter 8: Access Barriers to Health Services for Women Who Use Drugs in Eastern Europe and Central Asia
Chapter 9: Suzanne’s Story
Chapter 10: Sex Work, Justice and Decriminalisation: Beyond a Politics of Recognition in Promoting a Social Justice Response to Women at the Margins
Chapter 11: Women Incarcerated for Drug-related Offences: A Latin American Perspective
Chapter 12: Policing and Sentencing Practices in Russia and their Impacts on Women Who Use Drugs
Chapter 13: Women, Drug Policy and the Kenyan Prison System
Chapter 14: Drug Policy and Women Prisoners in Southeast Asia
Chapter 15: The Increase in Women Who Use Drugs in Zimbabwe
Chapter 16: Women as Actors in the Drug Economy
Chapter 17: Women’s Involvement in Organised Crime and Drug Trafficking: A Comparative Analysis of the Sinaloa and Yamaguchi-gumi Organisations
Chapter 18: From the Colombian Coca Fields: Peasant Women Amid the War on Drugs
Chapter 19: ‘Las Empoderadas’ Women Coca Growers Building Territorial Peace
Chapter 20: Unseen and Unheard: The Women in Duterte’s War on Drugs
Chapter 21: Happy’s Story
Chapter 22: Overdose Risks and Prevention Strategies for Pregnant Women in New York City
Chapter 23: Patterns of Recreational Drug Use and Harm Reduction Strategies among Women at Music Festivals: The Case of Hungary and Poland
Chapter 24: Queer Feminine Identities and the War on Drugs
Chapter 25: Best Practices in Reaching ‘Hidden’ Populations and Harm Reduction Service Provision
Chapter 26: A Mother’s Story
Chapter 27: Drug Users as Stakeholders in Drug Policy: Questions of Legitimacy and the Silencing of the Happy Drug User
Chapter 28: Improving Drug Policy Metrics and Advancements in Measuring Gender-based Drug Policy Outcomes
Chapter 29: Towards an Abolitionist Drug Policy Reform
Chapter 30: Women Who Use Drugs: Resistance and Rebellion
References
Index