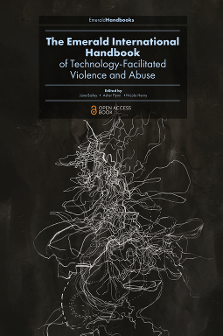 Copyright © 2021 Jane Bailey. Published by Emerald Publishing Limited. This chapter is published under the Creative Commons Attribution (CC BY 4.0) licence. Anyone may reproduce, distribute, translate and create derivative works of these chapters (for both commercial and non-commercial purposes), subject to full attribution to the original publication and authors. The full terms of this licence may be seen at http://creativecommons.org/licences/by/4.0/legalcode.

As the introduction to this Handbook made clear, technology-facilitated violence and abuse (TFVA) includes a spectrum of behaviors carried out through a diverse range of digital technologies. The eight chapters in the book's first section focus on TFVA issues and experiences across that spectrum, creating a foundation for subsequent sections that focus on particular forms of TFVA.

The first two chapters by Suzie Dunn and Chandell Gosse set the stage for this section and, in many ways, for the collection as a whole, by grappling with some key underlying concepts and concerns, particularly the importance of language, and the deep interplay between so-called “online” and “offline” experiences of violence and abuse. Dunn's chapter addresses the not infrequently asked question of whether the term “violence” is actually applicable to the broad range of behaviors that this Handbook argues fall under the umbrella of TFVA. She examines this question from both sociopolitical and legal perspectives. In particular, she draws on feminist and critical race scholar approaches which, respectively, conceptualize sexual violence as falling on a continuum (Kelly, 1988) and identify systemic violence arising from often intersecting oppressions such as racism and misogyny (Matsuda, Lawrence, Delgado, & Crenshaw, 1993), as well as legal analysis of particular instances of TFVA in Canada and the European Union. Ultimately, Dunn argues that “violence” is an apt and necessary term for ensuring socio-cultural recognition and condemnation of harmful technology-facilitated behaviors.

Like Dunn's chapter, Gosse's chapter highlights the importance of language for ensuring more widespread recognition of the harms suffered by TFVA targets. In her chapter, she reports on findings from interviews she conducted with women who had been targets of TFVA. Her women participants' experiences help to illustrate the negative impacts of what she refers to as the “increasingly redundant distinctions between online and offline.” Ultimately, she argues that the “digital dualism” of the online/offline distinction leads to the “treatment of offline life as more real than online life,” thereby denying “women who experience online abuse the space they deserve to have the abuse seen, interpreted, and treated as real and embodied.”

The next six chapters in this section engage with these insights in a variety of ways in the context of examining TFVA-related experiences within communities less frequently accounted for in the literature.

Walter S. DeKeseredy, Danielle M. Stoneberg, and Gabrielle L. Lory's chapter offers additional insights undercutting the online/offline distinction explored by Gosse. Their chapter examines the literature relating to the polyvictimization of North American women university/college students and considers the contribution of TFVA to these women's multiple victimization experiences. Noting emerging research demonstrating that TFVA has become “part and parcel of women's polyvictimization experiences at institutions of higher learning,” they argue for comprehensive multi-pronged strategies that recognize the “co-occurrence of offline and online victimization,” as part of a broader problem of male-to-female abuse on North American post-secondary campuses.

The chapters by Olusean Makinde, Emmanuel Olamijuwon, Nchelem Ichegbo, Cheluchi Onyemelukwe, and Michael Ilesanmi, and by Edgar Pacheco and Neil Melhuish report on the results of quantitative studies relating to a broad range of TFVA behaviors among two lesser studied communities. Makinde et al. report findings from their online survey of young people in sub Saharan Africa, a relatively understudied population in a geographic location where digital connectivity is an increasingly emphasized tool of economic growth and development. Among other things, their findings hint at the interconnection between “online” and “offline.” For example, they suggest that their finding that the reporting of “gender-related abuse was much higher in women than several other forms of abuse,” may be indicative of a “carry over to the digital space” of more broadly based patriarchal norms.

Pacheco and Melhuish's chapter details survey results relating to adult perpetrators of TFVA behaviors (e.g., unwanted sexual solicitations, etc.) in New Zealand. Given that much existing research focuses on targets of TFVA, as well as on young people (especially in the context of cyberbullying), their findings offer perspectives on TFVA from a different standpoint – that of the adult perpetrator. Better understanding the perspectives and motivations of perpetrators is likely to be an important component of developing meaningful, preventative approaches to TFVA. Like Makinde et al.’s chapter, aspects of Pacheco and Melhuish's chapter also speak to online/offline connections. For example, while almost half of their participants who had engaged in TFVA behaviors “indicated their actions occurred online only,” significantly higher numbers of younger participants (aged 18–29 and 30–39) reported a connection between their online behavior and an offline or face-to-face situation.

The final two chapters in this section by Jane Bailey and Sara Shayan, and Bronwyn Carlson and Ryan Frazer focus on the experiences and effects of TFVA on Indigenous peoples – communities not often focused on in existing TFVA research. Both chapters illustrate the deep imbrication between “real/virtual” and “online/offline,” highlighting how pre-existing systemic prejudices and cultural norms and practices are reflected in and re-entrenched through technologies. Bailey and Shayan's chapter discusses the impact of technology on the missing and murdered Indigenous women crisis in Canada, pointing not only to technology's use in perpetrating interpersonal violence and abuse against Indigenous women and girls, but also its use by the state to facilitate ongoing colonialist and misogynist abuses targeting Indigenous women, as well as Indigenous communities at large.

Carlson and Frazer's chapter focuses on cyberbullying and Indigenous peoples. They compellingly illustrate why “there are good reasons to assume that online conflict is different for Indigenous peoples because of diverse cultural practices and the broader political context of settler-colonialism.” Their insights demonstrate the profoundly negative impacts of standardized scholarly approaches to cyberbullying on developing nuanced understandings of the ways in which cyberbullying is enacted and experienced. Noting that such approaches are “delimiting [scholarship's] ability to attend to social difference in online conflict,” they “join calls for more theoretically rigorous, targeted, difference-sensitive studies into bullying.”