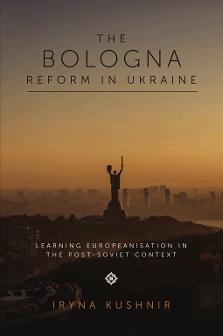 The Bologna Reform in Ukraine

The Bologna Reform in Ukraine: Learning Europeanisation in the Post-Soviet Context

This book is dedicated to my parents.

European Community Action Scheme for the Mobility of University Students

Organisation for Economic Cooperation and Development

Dr Iryna Kushnir is currently a Senior Lecturer in Education Studies at Nottingham Trent University. She previously worked at the University of Sheffield and the University of Edinburgh. Dr Kushnir's research in the area of sociology of education combines the following main interdisciplinary angles: higher education, education policy, Europeanisation, internationalisation and post-Soviet transition. Her interdisciplinary approach has led to empirical and theoretical contributions, which reveal how education policy on one hand and wider societal process of internationalisation on the other hand are interrelated and mutually shape one another.

This book explores the process of the Bologna reform in the Ukrainian higher education system, particularly focusing on the period between the start of the reform in Ukraine in 2004 through a Bologna pilot project, which turned into a nation-wide reform in 2005 – all the way until 2014. The book also considers higher education developments in the country prior to the start of the Bologna reform – since Ukraine gained its independence in August 1991. Bologna is one of the most well-known and influential European projects for cooperation in the field of higher education. It aims to create an internationally competitive European Higher Education Area (EHEA) through a range of such objectives as the adoption of a system of credits, cycles of study process, diploma supplement, quality assurance, qualifications frameworks, student-centred education, lifelong learning and the promotion of student and faculty mobility. Through an in-depth examination of higher education actors and policy instruments in the case of the implementation of Bologna in Ukraine, this book aims to (1) analyse the process of the Bologna reform in Ukraine and (2) examine Bologna as a case of Europeanisation in the post-Soviet context. This analysis is based on interviews with key policy actors and text analysis of selected policy documents.

The book suggests that the Bologna reform in Ukraine primarily developed as an interrelationship between policy continuity and change. On the one hand, the book shows that most of the key powerful actors and networks in the country, established before the introduction of Bologna, retained their prior influence. As a result, Bologna – to a large extent – simply reproduced established relationships and pre-existing higher education policies. The Ministry of Education and Science was the primary actor pushing for this kind of policy continuity. On the other hand, Bologna also partially changed some aspects of the old higher education instruments and the established relations among the actors. These changes took place due to the involvement of civil sector organisations which increasingly became crucial as policy brokers in the process of this reform. The book suggests that the old practices and innovations in Bologna were interacting in layering – a gradual messy and creative build-up of minor innovations by different higher education actors in Ukraine. The accumulation of these innovations led to more fundamental changes – the beginning of the emergence of a more shared higher education policy-making in the previously centrally governed Ukraine. These findings shed some light on the broader process of Europeanisation in the post-Soviet context. The Ukrainian case thus suggests that at least in the post-Soviet context, Europeanisation is the process in which change and the continuity are not mutually exclusive, but rather closely interconnected.

I would like to express my gratitude to my PhD supervisors, Dr Sotiria Grek, Dr Cathy Howieson and late Prof. David Raffe, for their careful guidance, precious advice, feedback and support throughout this research, which became my personal learning journey and made a foundation for this book. I am also thankful to my interview participants for sharing their valuable expertise and insights. Special thanks should also go to the funding services of the University of Edinburgh for supporting this research financially.

I would like to acknowledge the loving and inspiring support of my family, friends and colleagues, in particular my parents and brother, throughout the exciting and, yet, challenging years dedicated to this research. I also need to specially acknowledge my colleagues and friends, Olena and Sharifah, for their insightful questions about my research focus. I am also obliged to Claire, Monika, Melissa, Ivan, Sasha, Jingyi and Nidhi for proofreading earlier drafts of this book.

Finally, I would like to thank my university teacher in the USA, Mr Ronald Truelove, for encouraging me to undertake postgraduate research and consider an academic career, and cheering for my success ever since. I am grateful to my school English teacher in Ukraine, Mrs Stefaniya Shymkiv, and all other people who, at some point of my life, contributed to my ability to start and conduct this research with grit and passion.