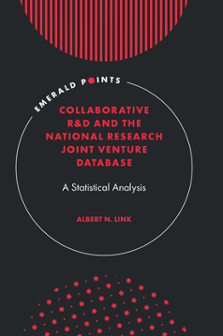 No part of this book may be reproduced, stored in a retrieval system, transmitted in any form or by any means electronic, mechanical, photocopying, recording or otherwise without either the prior written permission of the publisher or a licence permitting restricted copying issued in the UK by The Copyright Licensing Agency and in the USA by The Copyright Clearance Center. No responsibility is accepted for the accuracy of information contained in the text, illustrations or advertisements. The opinions expressed in these chapters are not necessarily those of the Author or the publisher.

Plato wrote in The Republic the following, “The beginning is the most important part of the work.” Being so motivated, I am using this Prologue to explain briefly my entrance into the research field of collaborative R&D or more specifically into the study of research joint ventures (RJVs).

My research journey began in 1985 with a research grant from the National Science Foundation (NSF). The project, titled “An Economic Analysis of Cooperative R&D Programs,” had the objective of creating a national database on formal RJVs based on public filings in the Federal Register in the aftermath of the National Cooperative Research Act (NCRA) of 1984. The unit of observation in the database that I created, which I named the COoperative REsearch (CORE) Database, and which I discuss in some detail in Chapter 1 of this book, was the RJV itself. Since then, I have continued to write about cooperative research and RJVs both in terms of legislative initiatives and in terms of informal firm-with-firm, firm-with-university, and firm-with-public sector research cooperation.

This book represents, to some extent, a stopping point in my research journey. In early 2014, I developed a survey instrument to collect detailed information about RJVs. My effort of testing the instrument and soliciting RJV-active firms to respond to it resulted in what I call the National RJV database (NRJVD). I had the privilege of unveiling aspects of this database at the Organisation for Economic Co-operation and Development (OECD) in Paris in 2014. Since that time, relevant data were collected and analyzed. I have published a few papers based on the NRJVD and a 2020 book titled Collaborative Research in the United States in which information from the NRJVD is described in some detail. This book is my swan song, so to speak, on collaborative R&D and RJVs. Emerald Publishing was kind enough to make pages available to me to explore the NRJVD descriptively and econometrically, and herein I am pleased to present my findings.

His research focuses on entrepreneurship, technology and innovation policy, the economics of R&D, and policy/program evaluation. He is currently the Editor-in-Chief of the Journal of Technology Transfer. He is also co-editor of Foundations and Trends in Entrepreneurship and founder/editor of Annals of Science and Technology Policy.

His other research consists of more than 200 peer-reviewed journal articles and book chapters, as well as numerous government reports. His scholarship has appeared in journals such as the American Economic Review, the Journal of Political Economy, the Review of Economics and Statistics, Economica, Research Policy, Economics of Innovation and New Technology, the European Economic Review, Small Business Economics, ISSUES in Science and Technology, Scientometrics, and the Journal of Technology Transfer.

Based on citations to his published works, he ranks in the top 10 of all global scholars registered in RePEc in a number of different fields of study in economics.

His public service includes being a member of the National Research Council’s research team that conducted the 2010 evaluation of the US Small Business Innovation Research (SBIR) program. Based on that assignment, he later testified before Congress in April 2011 on the economic benefits associated with the SBIR program. He also served from 2007 to 2012 as the US Representative to the United Nations (Geneva) in the capacity of Co-vice Chairperson of the Team of Specialists on Innovation and Competitiveness Policies Initiative for the Economic Commission for Europe. In October 2018, he delivered the European Distinguished Scholar Lecture at the Commission’s Joint Research Centre (Seville).

There are a number of individuals who assisted on my research joint venture (RJV) journey which is capstoned by this book. As the readers will learn, the first person to thank is Laura Bauer (now Lauer Bauer Beecy). As a graduate student in economics at the University of North Carolina at Greensboro, she provided invaluable research assistance on my genesis research into collaborative research (see Link & Bauer, 1989). Second, I thank John Jankowski and Francisco Morris, both from the National Science Foundation, for their continued support of the COoperative REsearch database and the workshops on RJVs that followed.

Alphabetically, Jim Adams, David Audretsch, Lee Baldwin, Barry Bozeman, Jeremy Bray, Andy Brod, Kathy Combs, Bronwyn Hall, John Hagedoorn, Dennis Leyden, John Scott, Don Siegel, Greg Tassey, Nick Vonortas, and Asghar Zardkoohi have been co-authors on many previous research projects, and I have learned much from their involvement and shared insights. A number of these previous co-authors offered helpful comments and suggestions on earlier version of this book. To all, many thanks.

Finally, a heartfelt thanks to my wife, Carol, for her patience in my preparation of this book and of all the related research efforts that preceded it.