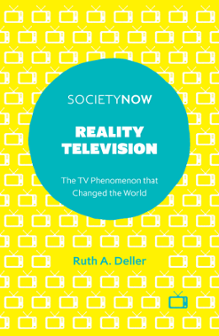 The Television Phenomenon That Changed the World

Published under an exclusive license

No part of this book may be reproduced, stored in a retrievalsystem, transmitted in any form or by any means electronic,mechanical, photocopying, recording or otherwise withouteither the prior written permission of the publisher or a licencepermitting restricted copying issued in the UK by The CopyrightLicensing Agency and in the USA by The Copyright ClearanceCenter. No responsibility is accepted for the accuracy ofinformation contained in the text, illustrations or advertisements.The opinions expressed in these chapters are not necessarilythose of the Author or the publisher.

In memory of Diane Kershaw (1970–2016), who introduced me to Strictly Come Dancing and always wanted my first book dedicating to her.

Ruth A. Deller is a Reader in Media and Communication at Sheffield Hallam University. She has published widely on a range of topics including: reality and factual television; fan and audience studies; media representations of gender and religion; and more. She is on the editorial board of Celebrity Studies journal and has edited special issues of Sexualities (with Bethan Jones and Sarah Harman) and the International Journal of Cultural Studies (with Feona Attwood).

Reality television is arguably the defining television format of the twenty-first century. It fills television schedules around the globe, as well as thriving on streaming and video sharing platforms which host new programmes and provide access to vast archives of content. Its stories and personalities are not only found on television screens but also in online forums, social media, celebrity magazines and newspaper gossip columns.

Reality’s techniques and tropes can be seen everywhere from ‘mockumentary’ comedies to found footage horror films; from sci-fi to soap opera. It has made new stars, revitalised the careers of failing celebrities and even seen one of its biggest characters ascend to the US Presidency.

Reality television has been praised for giving a platform to ordinary people, raising awareness of social issues and revitalising factual programming. Yet, it has been criticised by parents, politicians and pundits for sensationalism, manipulation and its potential to cause harm to its participants. So, what is it about it that makes it so fascinating? Why do we love it, hate it and, indeed, love to hate it?

In this book, I am going to get ‘under the skin’ of the phenomenon and to consider the current state of the genre as we enter the third decade of the twenty-first century.

Chapter 1 provides an overview of reality television, exploring what it is and where it comes from. It brings together key ideas from academics, participants, producers and journalists about the history and nature of reality television, outlines key programme formats and explores the various ways shows are, or are not, considered ‘reality’ by the TV industry, participants, audiences and commentators.

Chapter 3 explores reality television as an industry. It looks at issues of ethics and duty of care, processes of regulation, production and distribution, the role of advertising and product placement, issues of labour, and supplementary industries and products.

Chapter 4 focuses more closely on what happens in reality television, exploring its characters, formats, messages and stories in more depth. The chapter considers the casting mix of different reality shows and looks at the reasons people take part in reality shows.

Chapter 5 discusses Reality TV (RTV)’s relationship to fame. It explores the way it has made stars of ‘ordinary’ people and considers why some of its key performers have managed to sustain long careers in the spotlight whilst others have disappeared. The chapter also explores the appeal of reality for ‘traditional’ celebrities and what it can do for their image.

Finally, Chapter 6 looks at the role of reality television in an age of social media. It discusses the different ways the genre has capitalised on the internet, discusses social media strategies for TV shows, considers what the role of reality television is in an age of YouTube and influencers, and, finally, offers some thoughts as to where the genre might be headed.

This book is intended as a quick guide to reality television as a phenomenon, taking in a range of factors affecting its production and content – from different viewpoints, including participants, regulators, producers and critics.

Throughout the book, there will be extracts from interviews I have conducted with participants and professionals from the UK and Ireland. In line with my university’s ethics board recommendations, most have chosen to remain anonymous, including the name of the shows they participated in – some of these shows ran for a single episode or series; thus, naming them would expose the interviewees’ identities. Others have been happy to name the programmes they have been involved in, and some have asked to be named specifically. Commentary taken from audience members in forums, blogs and social media has been anonymised to give some privacy towards the authors.

Given the number of reality shows now runs into the thousands, if not tens of thousands, I could use the entirety of this book just trying to list them all – and the same is, of course, true of the many books and articles written about the phenomenon. So, if I have missed out your favourite, please forgive me!

I have tried to use a range of international examples, but as an author based in the UK, there are inevitably more from the UK. Likewise, I have attempted to reference a range of international perspectives on the phenomenon, but I am aware that a lot of the scholarship on reality television has been concentrated in the UK, the USA and Australia; therefore, whilst there are certainly some global trends we can identify, I acknowledge that authors from elsewhere in the world might have a very different take on some key issues.

Much has been written about reality television over the years, and this is a small book! So, my approach is primarily to think about reality television as it stands as the twenty-first century enters its third decade – how has it developed, who its stars are, how it sits within a world of streaming and social media, and where might it be going in the future.

Finally, just a note about me – I am a media and communications scholar, and an entertainment critic. I have been watching reality TV shows since before we even called them that! The genre has educated, entertained and enraged me in fairly equal measures over the years, and I come to this as a critical friend, rather than someone who wants to tear the whole thing down. And to pre-empt the inevitable question, I doubt I would ever choose to go on one (although, obviously, I have chosen the songs I would use if I were ever on Strictly Come Dancing, and have thought long and hard about my Big Brother gameplay strategy) – but I salute all those brave souls who have!