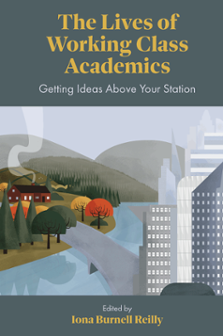 There is a significant change occurring in academia, as this volume of autoethnography attests, because many of us who are from working-class heritages are questioning the reasoning behind university class ceilings. 1 Linking all these chapters is the conclusion that working-class heritage scholars enrich universities in their teaching, scholarship and impact, but that the obstacles, sometimes unconscious, and frequently unacknowledged, are hindering the progress both of scholarship and of individual scholars.

This prompts two questions: in order to improve universities, do we need a change in legislation such as, in the United Kingdom, amending the Equality Act 2010, to include a prohibition on class discrimination; and secondly, is there anything that can be done until such legislative amendment?

The reasons behind the insufficient attention to class may have to do with the many myths surrounding class in universities and in the United Kingdom generally, which may also have contributed to the exclusion of class discrimination from legal prohibition. One of the challenges faced by those who confront class discrimination is that it is perceived as too difficult to define. In particular, there are issues such as fluidity, and attributed and self-attributed identity, and there are concerns with class being too loose to be capable of a satisfactory definition to constitute a category for protection in law. However, such arguments are open to challenge. 2 The right to change one's religion, recognised in international law, has not been regarded as an insurmountable obstacle to prohibiting religious discrimination. 3 Similarly, there is also fluidity in definitions of gender, and a change in gender is not regarded as a bar to gender equality, and in fact gender reassignment is a ground of protection. 4

This is not to deny the complexities surrounding class and other forms of discrimination; however, law has always, since its inception, grappled with complex and challenging cases in both domestic and international contexts. The travaux préparatoires or working documents of the United Nations Convention on the Rights of Persons with Disabilities, 2006, for example, illustrate the challenges of defining ‘disability’ based on different conceptions or models of disability – medical, social and human rights.

In any event it ought to be questioned, why class discrimination should be placed on a higher definitional tier than other forms of discrimination. The prohibited grounds of race and sex discrimination have not been exhaustively defined in their specific international or domestic instruments; rather, they have been defined and explored on a case-by-case basis. In defining class, guidance can therefore be sought from the approach to the definitions of race and sex.

Social mobility is also a less accurate concept than class. A legal prohibition on class discrimination would mean that universities would have to prevent class discrimination across the entire university, whereas social mobility, despite the excellent work of universities, is generally optional, recommendatory, and, with some exceptions, it does not apply to everybody. Social mobility alone cannot rectify the salary gap that the Sutton Trust and others have evidenced in their reports, so that those from working-class backgrounds with identical qualifications are and will continue to be paid less, unless such a discrimination is prohibited by law.

There are also difficulties in universities gathering data about class discrimination because universities are not under a legal duty to collate such information, and priority is understandably given to data which universities are legally required to collect.

Yet class prejudice is also reflected in the curriculum. How many courses which focus on increasing and equalising human longevity include class in their analysis? Yet there is a significant and unacceptable difference in life expectancy in the United Kingdom between different classes in boroughs of the same city. 5

Another change that this volume of autoethnography symbolises is that working-class heritage academics are gathering together to offer support to each other, and, equally importantly, to offer support to newer scholars and postgraduate students through regular seminars and mentoring. Much of this work is taking place under the auspices of the international Alliance of Working Class Academics. 6

Similarly, rather than waiting for legislative change, the world's first University Code on Equal Opportunity for Working Class Students and Academics 2021 has been drafted by the international Alliance for Working Class Academics. 7 It is designed so that universities around the world can adapt it to their own cultures, with their own linguistic terminology, such as in America, blue collar heritages. The University Code calls upon universities to acknowledge that students and academics from a richly diverse range of working-class heritages add economic, social and cultural value to communities, to the state and the global community, and enhance the scholarship, work, productivity and research impact of university communities.

A part of the devaluation of working-class culture is that universities generally do not include the rich range of working-class histories and experiences in curricula content. In law, for example, emphasis has traditionally been placed on John Locke, a lawyer's son and slave profiteer, and on his concept of a social contract, and less on Tom Paine, a corset-maker's son and abolitionist. However, Paine's concept of humanity in his Rights of Man is one of the earliest scholarly arguments for a wide range of state-guaranteed human rights. The principle underlining the University Code is of a democracy of knowledge, so that such valuable scholarship is also included in curricula.

The University Code is drawn from international law, which increases its normative strength. This includes, as the Preamble states, that universities ought to be guided by United Nations Sustainable Development Goal four on education to ensure equal opportunity, improve equitable access, enhance mobility and accountability by the United Nations targeted date of 2030.

While an express prohibition of class discrimination is the desirable longer-term goal, in the interim, The University Code on Equal Opportunity for Working Class Students and Academics 2021 provides a practical and constructive beginning for dialogue, which is the reason that the Alliance is currently working with one British university, the Code is on the websites of universities regulators and also in the newsletter of Universities UK. Ultimately, however, universities ought to take class discrimination as seriously as all the other prohibited discriminations, and the only way this is possible is if it is prohibited by law.

© 2022 Professor Emerita Geraldine Van Bueren QC is a Visiting Fellow at Kellogg College Oxford, the Chair of the Alliance of Working Class Academics, and holds a Leverhulme Fellowship for her work on Class, Social Mobility and the Law (https://www.workingclassacademics.com).

Under the International Covenant on Civil and Political Rights and in regional treaties, including the European Convention on Human Rights.

Court of Justice of the European Union in P v S and Cornwall County Council (1996) Case C-13/94 recognised that discrimination on the basis of gender reassignment constituted discrimination under the EU Directive on equal treatment for men and women.

The Alliance's support sessions, initiated by Carole Binns and organised by Craig Johnston and Charlie Davis, found that there is only limited recognition of the scholastic importance of working-class culture. They also revealed many unacknowledged obstacles in the pursuit of doctoral studies (https://www.workingclassacademics.com).

Prelims
Chapter 1 Navigating the Relational Character of Social Class for Capitalism in the Academy
Chapter 2 Mr Airport Man and the Albatross: A Reverie of Flight, Hope and Transformation
Chapter 3 Power, Corruption and Lies: Fighting the Class War to Widen Participation in Higher Education
Chapter 4 ‘Friends First, Colleagues Second’: A Collaborative Autoethnographic Approach to Exploring Working-Class Women's Experiences of the Neoliberal Academy
Chapter 5 Coming to Terms With the Academic Self: Place, Pedagogy and Teacher Education
Chapter 6 The Rubik's Cube of Identity
Chapter 7 Uptown Top Ranking: From a Council Estate to the Academy
Chapter 8 One's Place and the Right to Belong
Chapter 9 Who Do You Think You Are? The Influence of Working-Class Experience on an Educator in a Process of Becoming
Chapter 10 John Constable Was My First Art Teacher: Construction of Desire in a Working-Class Artist/Academic
Chapter 11 Class Is a Verb: Lived Encounters of a Minority Ethnic Academic Who Self-Identifies With Aspects of Working-Class Cultures in the United Kingdom
Chapter 12 Reading the Posh Newspapers
Chapter 13 Thames Estuary Academic
Chapter 14 Concluding Chapter: Tackling ‘the Taboo’: The Personal Is Political (and It's Scholarly Too)
Afterword
Enriching Universities and Scholarship by Prohibiting Class Discrimination
Index