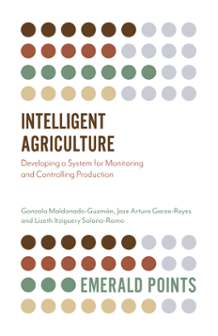 Developing a System for Monitoring and Controlling Production

We dedicate this book project to our families. Their love and constant and unconditional support have been an invaluable source of strength and inspiration to complete this project.

Gonzalo Maldonado-Guzmán is a Professor at the Universidad Autónoma de Aguascalientes, Director of the Small and Medium Enterprises Observatory, and Director of the Research and Postgraduate Studies Department. His areas of research include marketing, corporative social responsibility, innovation and knowledge management, and IT and intellectual property in small and medium size enterprises (SMEs). He has coordinated projects in the Aguascalientes state, Mexico, in innovation and organizational culture in micro and SMEs. He has international projects with Universities of Murcia, Cantabria and Cartagena, in Spain.

Jose Arturo Garza-Reyes is a Professor of Operations Management and Head of the Centre for Supply Chain Improvement at the University of Derby, United Kingdom. He is actively involved in industrial projects where he combines his knowledge, expertise, and industrial experience in operations management to help organizations achieve excellence in their internal functions and supply chains. He has also led and managed international research projects funded by the European Union, British Academy, British Council, and Mexico’s National Council of Science and Technology (CONACYT). As a leading academic, he has published over 100 articles in leading scientific journals, participated in international conferences, and has four books in the areas of operations management and innovation, manufacturing performance measurement, and quality management systems. Professor Garza-Reyes is Associate Editor of the International Journal of Operations and Production Management and Journal of Manufacturing Technology Management as well as the Editor of the International Journal of Supply Chain and Operations Resilience and Editor-in-Chief of the International Journal of Industrial Engineering and Operations Management. The areas of expertise and interest for Professor Garza-Reyes include general aspects of operations and manufacturing management, business excellence, quality improvement, and performance measurement.

Lizeth Itziguery Solano-Romo is a Professor at the Universidad Autónoma de Aguascalientes. Her areas of research include information technology management, IT use and adoption, and digital marketing in SMEs. She has participated in the Aguascalientes state, Mexico, in the implementation of the new criminal justice system. She has international project participation to reduce the IT gap between public and private universities (ALFA-EU) with Universities of Finland, Romania, Brazil, Ecuador, and Colombia.

Agriculture is today one of the fields of knowledge least analyzed and discussed by various researchers, academics, and professionals not only in the field of agriculture but also in different areas of knowledge, although it is an elementary construct for the existence of humanity itself (Ding et al., 2018). Also, currently, the total world population amounts to a little more than seven billion people, and according to the estimates that have been made by the main international organizations, it is expected that by the year 2050, it will generate a substantial population growth of a little more than 2.5 billion people, which will be located primarily in the main urban cities, which will mean that a little more than 90% of the total world population will be concentrated practically in two continents: Asia and Africa (Lloyd, 2017).

However, world food production is totally limited, especially in Africa, and the serious problem of food shortages worldwide has not yet been resolved (Sánchez, 2002). In addition, the Asian continent has serious problems of shortage of drinking water (Pomeranz, 2009), even though 72% of the total surface of the earth is covered by water, and it is estimated that there are a little more than 1.45 billion cubic kilometers of water. Despite the existence of an extensive territorial extension covered by water, a little less than 1% of the total water on the planet is fresh water that is used not only for human consumption but also for agricultural irrigation, which represents a little more than 13 billion hectares; however, only 22% of that land is potentially arable (Lal, 1990).

In this context, there are currently diverse countries that apply traditional agriculture methods that have a high consumption of potable water, are intensive in labor, use fungicides and pesticides that are highly polluting, and are low in productive efficiency (Ding et al., 2018). Therefore, considering the significant increase in the world’s population, the severe shortage of drinking water, the existing limitation of resources, and the low level of efficiency of agricultural productivity, among other factors, it is indispensable and urgent that researchers, academics, and professionals from all areas of scientific knowledge guide their studies in the analysis and discussion, not only of the efficiency of a regulated agriculture but also in the development of agrotechnology that propitiates an Intelligent Agriculture, because this will allow an adequate utilization of the available resources.

In this sense, even when the systems of Smart Agriculture are too complex, multivariate, and unpredictable (Kamilaris, 2018), it is also possible to incorporate classic technological controls, such as integral processes or differentiated integral processes (Christofides, 2013; Afram and Janabi-Sharifi, 2014), which are not only easy to implement but also to control the movement processes they generate, thereby allowing an adjustment in the control of energy and the time of consumption (Wang, 2001). In addition, the use of intelligent methods such as the control of fuzzy logic, linear regression, and artificial neural networks involves not only deterministic mathematical models but also generalized mathematical models and mixed models, which allow the development of predictive models of agricultural production more accurately (Afram and Janabi-Sharifi, 2014).

Likewise, the use of these mathematical methods require a high level of reasoning and understanding and are generally based on the use of historical data on agricultural or agroindustrial production, or on the generation of expert or high-level knowledge (Ding et al., 2018). Therefore, the performance of the mathematical models of control and prediction of agricultural production is superior to that of the classic models of production control, and they are generally simpler to implement when using intelligent algorithms through computers. Thus, the mathematical models of production control and prediction have a high reliability and accuracy of the levels of agricultural and agroindustrial production, in addition to significantly reducing the use of drinking water, electricity, and emission of CO2 (Ding et al., 2018).

Similarly, control and prediction models of agricultural or agroindustrial production generally refer to the use of advanced algorithms through computers that are used to explain and develop predictive models of future growth that plants will have, or the growth that is estimated to have food production (Qin and Badgwell, 2003). Therefore, this type of control and prediction models work with a series of inputs that are controlled by the computers during a certain period of time, and they take the data usually from a selected sample of a dataset that reveals agricultural or agroindustrial production; however, only some of these models are implemented in the production prediction process (Bumroongsri and Kheawhom, 2014) because they generate the smallest possible error in the prediction of food production.

Therefore, given that industrial processes are increasingly complex, involve an increasing number of interfaces, and are strongly non-linear, it is essential that new production control and prediction models are adapted and implemented in the companies of all sizes and sectors, as is the case of internal control models, which are more robust and have the minimum possible error in their application (Ding et al., 2018). However, the time to perform the calculations for the internal control models should be relatively long and totally efficient, to aspire to obtain robust results and with a minimum error, for which researchers and academics have considered necessary that this type of models be stabilized (Ding et al., 2018), that is, that they adapt to the production processes of the companies where they will be applied (Zhang, 2017).

We thank the British Council for having financially funded the international research project entitled Developing Food Security and Water Conservation for Economic Growth in Mexico – A Smart Monitoring and Control System (SMCS) Agro-Technology for Sustainable and Efficient Farming Operations (No. 275317449), from which this work is derived. The project was funded through the Newton Fund and the Institutional Links scheme of the British Council, and it was carried out through an international collaboration between the University of Derby (UK) and the Universidad Autόnoma de Aguascalientes (Mexico).

We would like to thank our institutions, the University of Derby (UK) and the Universidad Autόnoma de Aguascalientes (Mexico), for their unconditional support to complete the research project and production of this book. Also, we would like to thank our publisher “Emerald Publishing Limited” and its editorial team for assisting us with this publication. Finally, we would like to express our deepest gratitude to our following colleagues who also made a significant contribution to the research project and this work: