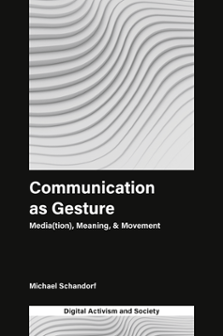 The series publishes books on theories and empirical case studies of digital politics and activism in the specific context of communication networks. Topics covered by the series include, but are not limited to:

About the Series Editor

Dr Athina Karatzogianni is an Associate Professor at the University of Leicester, UK. Her research focuses on the intersections between digital media theory and political economy, in order to study the use of digital technologies by new sociopolitical formations.

Published Books in this Series:

Internet Oligopoly: The Corporate Takeover of Our Digital World by Nikos Smyrnaios

There once was a linguist most eerie,

whose papers made everyone weary;

but when we called them twaddle

I never once called it a theory!”

This book is part historical exercise and part theoretical synthesis, both of which involve revisioning what communication is by reconsidering what we have for centuries thought it to be. The early twenty-first century seems to me to be a particularly good time for such a reconsideration because the ways in which most of us now interact with one another are in some ways – technological ways – so vastly experientially different than anything else in human history. At the same time, human beings – our sensory apparatus, the bodies-and-brains that make sense of our worlds and each other – have not changed in any dramatic way since well before the shift from hunter-gatherer to agricultural communities.

While human beings have always (already) been technological beings (whether using spears or spades or smartphone apps, cowries or coins or credits), our fascination with technological novelty has unfortunately led much of the investigation of communication and language into a labyrinth of dead ends. Some of those ends are ‘dead’ in sense of being almost entirely inhuman apotheoses of, for example, ‘algorithmic cultures’. Far too often, either the human and the technological are functionally divorced from one another and taken to be completely separate phenomena, or (sometimes even and) technological evolution is assumed to be directly indicative of or isomorphic with human evolution, usually some kind of disembodied cognitive evolution of technologized minds. Both of these misconceptions are the logical result of basic theoretical assumptions about what communication is, how it works, and what it does – assumptions that conjunctively shape our conceptions of what human being is because being human happens in communication.

Over the past few decades, a loose collection of broad themes has variously coalesced in Western theoretical circles involving the deep relationality of all things, broadly considered in terms of ‘posthumanism’, for example. This underlying relational onto-epistemology entails a spatialized account of interaction (as in, for example, the use of ‘ecology’, or more reductively ‘network’, as a general structural metaphor), which further entails the imbrication of interaction, communication, and mediation as basic theoretical concepts across a wide range of interests and disciplinary perspectives. ‘Communication’, broadly conceived, has thus moved to the heart of contemporary philosophical and theoretical trends across a wide range of disciplinary perspectives, while, simultaneously, the continuing dynamic evolution of communication technology has set in high relief the myriad complex interactions that constitute mundane human life and beyond.

However, the diverse fields of investigation comprising communication studies, importantly including new and digital media studies, have arguably contributed little to the shaping of these theoretical currents (apart, perhaps, from the reductive metaphor of ‘the network’). The reason for this is that the basic assumptions of communication studies, rooted in classical rhetoric, linguistics, semiotics, classical information theory, and cybernetics, are bound to linear, reductive, positivistic philosophical assumptions that are broadly incompatible with any kind of relational onto-epistemology.

Ironically, these assumptions, of which the conventional ‘sender-message-receiver model’ is emblematic, are almost universally acknowledged to be inadequate. Nevertheless, that acknowledged inadequacy has done nothing to uproot or weed out the linear positivistic assumptions that ground communication studies. We all accept that ‘everything is connected’, but we approach connection itself in terms of the analytical separation of both discrete entities comprising ‘information’ and linguistic categories that uncritically conceive ‘text’ (in varying conflated senses of the term) as ‘data’.

This book makes three broad, imbricated moves to address these problems. First it reconsiders the roots of the study of communication in rhetoric, linguistics, semiotics, information theory, and cybernetics, to uncover the underlying theoretical and methodological limitations embedded in traditional assumptions about communication. Second, it demonstrates that a more relational understanding of communication processes can be recovered and gathered from the inherent relations among these roots. Third, it reintegrates these theoretical and philosophical roots with more recent work in spatial cognition, interactional sociology, and ecological and relational psychology to provide a matrix for a meta-theoretical account of communication based on a theoretical concept of ‘gesture’ that emanates from a fundamentally relational onto-epistemology.

The purpose of this book, then, is primarily to articulate the problem and prepare the ground for further conversation. The final section of the book provides a coalescence and integration of the major themes, and (perhaps despite my title) just the barest hint of what a post-transmission or post-exchange communication theory could be. I very much look forward to those conversations and, in the meantime, I hope that this book can serve to introduce future interlocutors to a variety of disciplinary histories and theoretical perspectives that share roots but have only rarely interacted directly.

This book is a focused extension of my dissertation, completed at the University of Illinois at Chicago. For that reason, all of those who supported and contributed to that exercise are similarly culpable for this one. However, I must acknowledge the continued support of Athina Karatzogianni, the Editor of this series, without whom this book and much of the broader project to which it belongs would certainly not have been possible. Sincere gratitude to Roy Christopher and Andrew Rojecki for both valuable feedback and moral support. I also want to thank Cindy Sherman Bishop for her interest, her gracious and insistent sharing of vast social capital, and just for listening. Finally, but most importantly, thanks to Betty Chun for continued faith and support (and prodding).