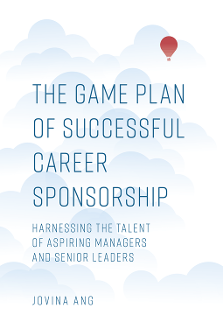 The research methodology is comprised of an autoethnography (Study 1), an inductive qualitative case study research (Study 2) and an online study (Study 3).

Autoethnography is a form of personal reflective and reflexive research that comes with deep insights and critical thinking, resulting from an experiential journey that takes the readers through the lens of the writer. This study provided an overview of my own sponsorship experiences in my corporate career spanning over 20 years working for multinational organisations such as Telstra Corporation, Motorola, Microsoft and Dell. All my sponsor relationships were informal relationships that evolved organically from supervisor–subordinate relationships to sponsor–sponsee relationships. In this autoethnography, I wrote about three sponsee experiences and one sponsor experience.

Even though autoethnography is not widely practised in organisational behaviour, there’s value in conducting this type of research because it can provide unique insights that can surface from deep introspection and analysis. It is a research method that allows the researcher to ‘enact the worlds we study’, (Denzin, 2006, p. 422) and it accounts for how the inner personal world interacts with the outer societal world. Autoethnography is a ‘methodology of the heart, it is a form that listens to the heart’ (Denzin, 2006, p. 423). Listening to the heart is an important aspect of research as in a way; it represents a ‘slow’ form of thinking (Kahneman & Egan, 2011) because it is deliberate, effortful and controlled. Hence, autoethnography surfaces not only but also feelings (Ellis & Bochner, 2006).

On its surface, it may appear that writing an autoethnography is an easy task. On the contrary, it is not an easy task, as it is a form of research that involves a lot of slow and deep thinking to derive insights. While some aspects of my autoethnography were enlightening, there were some aspects that challenged me and made me vulnerable as I researched my sponsorship experiences over the two decades of my corporate life.

The primary purpose of conducting an in-depth inductive qualitative case study research was to examine the sponsorship phenomenon in a real-life context, especially when the boundaries between the phenomenon and context are unclear (Yin, 1981). By examining different cases and combining perspectives from the sponsors and sponsees, this method of inquiry provides different perspectives on sponsorship while giving a robust comparative logic for developing and replicating insights (Eisenhardt, 1989).

In this case method of inquiry, I adopted a semi-structured questionnaire because I wanted my research participants to freely tell me their sponsorship experiences. When provision is made to allow people to use their own words and narratives, there is greater tendency for them to be more authentic about themselves and their experiences. It also enables people to make sense of how things work, thus, can contribute to a rich source of data (Brown, Denning, Prusak, & Groh, 2005; Kram, Wasserman, & Yip, 2012).

I also anchored my case study research on propositions that were developed from mentorship literature and practitioner-oriented articles because I wanted to signpost the research.

Unlike previous studies that only studied the sponsee’s perspective, this case study included dyads and non-dyads of sponsors and sponsees to give a more holistic view.

I employed a theoretical sampling approach. The data were collected from 19 sponsors and 16 sponsees working in multinational companies and the public sector. These individuals have Singapore-based, Asia-based or global roles.

While there is no ideal number of cases, according to Eisenhardt (1989), the examination of 4–10 cases should be sufficient to generalize the findings for a typical case study research. In this study, I examined 29 cases, of which, there was a sample size of 35 participants – 19 sponsors and 16 sponsees. There were six sponsor–sponsee dyads including three same-gender and three mixed-gender dyads. The six sponsor–sponsee dyads were all in supervisor–subordinate relationships. Care was taken to ensure a good representation of both genders in the sponsor (11 males, 8 females) and sponsee (7 males, 9 females) samples.

An important feature of the case study method is the frequent overlap of data analysis and data collection (Eisenhardt, 1989; Yin, 2014).

As a first step, I compiled and categorised my handwritten notes into the themes and topics that caught my attention either during or just after the interviews. Before I started the ‘formal’ coding process, I read and reread the interview transcriptions multiple times and highlighted the key themes from each interview. I then proceeded to code the data using a hybrid-coding framework consisting of a priori specifications of the interview framework, and codes and themes that had caught my attention. The coding scheme was constructed based on carefully selected words, synonyms and phrases that the interviewees used. I spent a lot of time ‘juxtaposing’ data from two or more cases.

The unit of analysis that I employed was phrases because phrases in any language form the basis of knowledge and provide richer insights than single words to the phenomenon studied. It is also a form of ‘in vivo’ coding to capture the exact words, narratives, quotes and metaphors that my participants used to describe the phenomenon. Initially, I used Microsoft Excel for the coding process before migrating to Atlas TI qualitative research software when the data became too complex to handle using Excel.

As part of the reiterative and overlapping process of coding, analysing and theory building, I commenced my first detailed analysis and completed a draft write-up following the 10th interview, repeating the cycle after the 18th interview, 24th interview and, finally, after the 35th interview. This process of going back and forth of coding, analysing and writing was essential in ensuring that the salient points were coded and captured in the analysis and the key concepts and ideas were strengthened in the analysis (Davidson & di Gregorio, 2011; Eisenhardt, 1989; Yin, 2014).

The diagram below depicts the reiterative and overlapping process of data collection, coding analysis and theory building (Fig. A1).

Study 3 was essentially an online quantitative study that was administered using Qualtrics. This study was conducted following the completion of the analysis of studies 1 and 2 to shed additional light, especially quantitative measures on the behaviours of the sponsor and their relative impact on the sponsee’s career progression.

To get the research started, I wrote a personalised email to over 150 people in my network inviting them to participate in my study. Because I targeted senior people in my network, the number of questions in the online study was kept to a minimum – allowing the study to be completed in less than 10 minutes.

A total of 100 senior leaders completed the online survey in the period from October to December 2017. The distribution of the sample was 57 percent male and 43 percent female, and the majority of the participants came from Australia, Singapore and the United States, with most of them at the director level of their respective organisations. The participants also included people at the C-Suite, senior executives and board members. The average age band of the sample was 45–54 years of age.

Method to Combine Studies 1 and 2

I employed two approaches to combine the studies:

To help me with this enormous task of combining the two dissimilar and diverse studies, I looked at Weick’s (1989) concept of theory construction – a concept that is centred on the adoption of a ‘disciplined imagination’ for theory building. Weick (1989) asserted that the quality of the theory is dependent on the accuracy and framing of the problem statement, the number of and independence among thought trials or conjectures used to solve the problem and the use of diverse selection criteria to test and make sense of the conjectures.

The first approach I used was the antecedents – interaction – outcomes framework to draw general conclusions from the two studies to develop a comprehensive theory of sponsorship. This was an elaborate and creative process that required me to take each variable apart, taking a step back before I put the variables together to construct a sponsorship model. This idea came to me while recalling how my children played with their Lego bricks when they were younger. Before constructing a model, they would take apart the pieces of Lego bricks and ‘experiment’ with various bricks to create the Lego model of their desires.

Even though this process was laborious, it was a comprehensive and thorough process for developing the sponsorship model. It also gave me a robust, logical and systematic way of adopting the ‘what – how – why’ approach to theory building.

The second approach I took was to use a capital-based framework in my treatment of sponsorship. Taking a ‘leaf’ from the resource-based view (RBV) of a firm (Barney, 1991) and treating the individual a ‘firm’, I went about constructing the sponsorship model by examining the unique capital resources that are needed for career success. These unique capital resources help the individual to gain competitive advantage in the ‘career’ market place.

Given that two of the three studies were inductive in nature, they are more descriptive and exploratory rather than explanatory; caution must be taken in drawing insights from the findings, which were essentially the interpretations of sponsorship experiences by the participants. It can be argued that the qualitative nature of the studies can evoke interpretations that were built on sense making as the approach encouraged thinking, reflection and internalisation of interpretations and meanings of the sponsorship experiences (Weick, 1995; Weick, Sutcliffe, & Obstfeld, 2005). I recognise that additional research is needed to capture actual sponsorship dynamics.

Unlike the positivist approach to theory building, autoethnography is a reflexive method that is centred on ‘dwelling in’ the theory (Burawoy, 1998). Even though there is an artificial separation that exists between the researcher and subject, there still exists an element of engagement between the researcher and subject. It is through this engagement as the ‘subjective self’ (Wall, 2006) that the researcher is able make sense of the phenomenon (Weick, 1995). Hence, it is a research method that accommodates subjectivity and emotionality and acknowledges the influence of the researcher on the phenomenon (Ellis, Adams, & Bochner, 2011). While this is a methodological risk that autoethnography allows for, it is one that is less traditional in the Organisational Behaviour literature.

Even though the case method of inquiry has been proven to be a robust and tested method for qualitative research, the limited number of cases may limit broad generalisability of these findings even though a theoretical sample was employed. Furthermore, the sample used in this study was biased in the sense that, it involved people in sponsor relationships, and probably principally included people with generally a positive view on sponsorship. As some participants were not currently in a sponsorship relationship during the time of the study, they relied on their memories and past experiences in relaying and making sense of their stories and accounts of their sponsorship experience. A lack of recency effect could have affected their recall, and it could have potentially diminished the quality of the study even though an interview questionnaire was provided in advance so as to provide the participants time to think, reflect and prepare for the interviews.

Recognising that all relationships have both positive and negative aspects, another limitation concerns the less than comprehensive examination of the negative aspects of sponsorship.

Even though I conceptualised that sponsorship capital is comprised of the four different capital resources, a limitation exists in this approach. I was not able to ascertain how these capital resources interact with one another. Future research is needed to examine how all these four capital resources fit together, especially to ascertain their respective strengths of their relationships in this capital-based framework for career success and career progression.