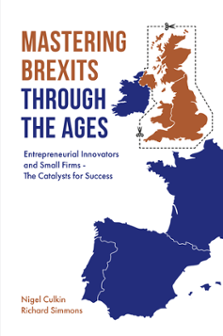 MASTERING BREXITS THROUGH THE AGES

Entrepreneurial Innovators and Small Firms – The Catalysts for Success

More Praise for Mastering Brexits through the Ages

Every generation experiences various challenges and for the current UK generation, Brexit is but one of these challenges. Brexit is a form of transformation and during such transformation road maps seldom exist. There might be more questions than answers, which are often in conflict with one another and the validity of solutions is questioned from a factual or emotional basis. In this regard, Culkin and Simmons utilise historical paradigms to create understanding how the UK can seize the opportunity to build a sustainable and innovative socio-economic environment for the future. They base their debate on a rich basis of literature and provide refreshing discussions on Brexit from a total different perspective.

The uncertainty that Brexit has provoked affects the future of investment, trade, innovation and employment, and it will impact on micro, small and medium enterprises. This book seeks to make a novel contribution to the ongoing debate, identifying alternatives based on lessons learned from the past, before offering the reader an action plan for firms to cope with the future challenges. Nobody can say with any degree of certainty whether small firms will win or lose from the process, but it is urgent to ask these questions and prevent fallouts.

Culkin and Simmons take the opportunity of impending Brexit to remind us that this is not the first time that Britain has tried to sever its ties with Continental Europe or to be plunged into a crisis due to the disruption of foreign alliances. They look at these crises from a business perspective, drawing on a rich literature on how organisations cope with change and disruption. Firms that do adapt in the ways they suggest might reap the benefits.

MASTERING BREXITS THROUGH THE AGES

Entrepreneurial Innovators and Small Firms – The Catalysts for Success

Nigel Culkin is Professor of Enterprise and Entrepreneurial Development at the University of Hertfordshire. He has published widely in the areas of small business leadership, entrepreneurial universities, graduate entrepreneurship and the creative industries, as well as completing projects for UK and overseas government agencies, large multinational organisations and research councils. In 2014, he was elected to the post of President at the Institute for Small Business and Entrepreneurship (ISBE); and, in 2015, was invited to join the prestigious Peer Review College at the Economic and Social Research Council (ESRC). He is a regular attendee at the UNCTAD Expert Meeting on entrepreneurship and building productive capacities, held in Geneva.

Richard Simmons is an Economist with enduring expertise in SMEs as innovation engines. He has a strong belief in market solutions, with interests in growth processes, ethical financing and dynamic (including monetary) equilibrium in an entrepreneurially driven and financially sophisticated world. Formerly holding senior regional and global management roles in various leading-edge high technology and medical device firms, he has lived and worked globally. He now advises a senior global investor based in Riyadh and is a Visiting Lecturer at the University of Hertfordshire.

The journey towards this book started with the result of the June 2016 Brexit Referendum and a nagging fear that a ‘black swan’ or two may be on the horizon. Given, that almost everyone’s prognoses differed from the immediate post-Brexit reality, we began looking for some form of reference as to potential outcomes. Could history offer any insights as to what these might be? And from that germ of an idea this book was born. Our manuscript was completed in October 2017.

Having just read the final proofs, it struck us how much about Brexit remains essentially the same as when the manuscript was completed. Every day, the press presents another strand as to what might be, and every day the Article 50 notice clock keeps ticking. Little healing appears to have taken place. What is said to be agreed in one breath seems to be challenged by someone else in the next. And so the arguments go on, but these debates are amongst us in the UK, rather than a genuine negotiation with our European Partners. This narrative often feels like an echo from the discussions of the 1840s and 1850s that culminated in the 1846 Corn Law repeal and the 1860 Cobden Chevalier Treaty. A familiar discourse covering Free Trade, Trade Agreements and with an underlying subtext framed in strategic aims to maintain and expand Empire; or, perhaps as some have more recently suggested, a network of Free Trade Agreements loosely based around the Commonwealth.

Sterling has risen against the US dollar over recent months, but the more business-related “trade weighted” exchange rate index continues to show a sharp decline in the value of Sterling since the 2016 Brexit Referendum. The many European Union – Third Country Treaties that will fall on Brexit Day remain an unresolved issue. And although little is featured in banner headlines, a number of companies and financial institutions seem to be taking steps to quietly move some of their operations into other EU States. It is hardly surprising they are quiet in doing this, as they are acutely aware that just over 50 per cent of the country believes passionately in Brexit as the way forward.

Almost two years after the Referendum, the bitter divisions continue. If anything, it feels like positions have become more entrenched. The 2016 General Election that saw the loss of the Conservative majority in Parliament was also characterised by a higher youth vote than previously registered. The participation of a younger generation in shaping what sort of country they want will, one senses, become a more important feature of the on-going narrative as the story unfolds.

In some sense, we live in a ‘social media’ framed future, a world in which new groups or ‘Tribes’ can form and re-form, according to the ‘trending’ issue of the day. These Tribes are hungry for news that helps confirm their ‘Tribal Identity’ and disparaging of anything that does not. The traditional print media largely plays to these Tribes to safeguard its own sales in a fast-changing and fast-digitising media landscape. In the sixteenth century, these Tribes would have been defined by religion, today it’s more likely to be Leaver or Remainer or perhaps Old or Young, Urban or Rural and forth. The tracts of the Elizabethan or early seventeenth century printing press have morphed into the blogs and social media feeds of today. It’s an ironic thought that advanced civilisation is more usually identified with the breaking down of tribal barriers than creating new ones.

Despite the backward-looking feel, we continue to believe that the UK’s future well-being will rest upon how it can adapt and embrace emerging technologies and market transformations to leap-frog existing competitors. The winners in this arena will most likely be visionary entrepreneurs who seize the moment to build new, unique and profitable market spaces for themselves. Whilst favourable trade treaties can help, we believe that the ‘magic growth dust’ will be the entrepreneurs and the firms they build that go on to transform the global markets they operate in. The post-Brexit narrative has not changed this central theme in our book.

So, we are faced with the adage of plus ça change et pas de change. So much changing and nothing changing. We believe that history is perhaps the most meaningful window to help us evaluate potential Brexit impacts, in the same way innovation and entrepreneurship will be essential tools to building a new post-Brexit sustainable future. After so many column inches devoted to Brexit, perhaps the past six or so months can be summed up by our definition of Brexit below.

As our narrative will demonstrate, entrepreneurs who successfully push technological and market boundaries are key to constant renewal. In summary, entrepreneurs drive the rupture with the sterile, unfruitful or unproductive and build the future, perhaps another way of alluding to “Creative Destruction” in action.

In an echo from another age, we identify 14 points for consideration as the UK comes to establishing the 2019 Brexit Treaty. A treaty that we hope avoids becoming an idiomatic ‘2nd Treaty of Versailles’.

Brexit can act as a spur to reinvention and will be successful if it enables the support and resources the entrepreneurs, who will build our economic future, need to both attain the quest and surmount challenges they face.