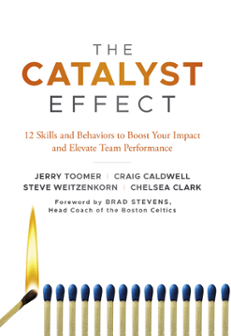 Teams perform at the highest level when they are cohesive. A unified force drives performance more powerfully than a divided one. Catalysts strengthen team unity and help overcome divisiveness. They unite team members for a common cause.

Common purpose is the bedrock of cohesiveness.

Cohesiveness is the extent to which team members stick together and remain united in the pursuit of a common goal (Molnau, 2017). You see true cohesion when individuals put the team’s goals ahead of personal interests. As Linda Hill and Kent Lineback write in the Harvard Business Review, “A clear and compelling purpose is the glue that binds together a group of individuals. It is the foundation on which the collective ‘we’ of a real team is built.” (2011) Common purpose is the bedrock of cohesiveness.

Highly cohesive teams concentrate on problem-solving, reaching objectives, and improving processes. Team members demonstrate a respect for each other and a commitment to supporting team decisions and strategies. They embrace accountability for themselves and emphasize it for all on the team and the team as a whole. The benefits include higher morale, improved communication, a congenial team environment, loyalty, and greater engagement in team decision-making (Daft & Marcic, 2009).

What is the Purpose of a Team and What Makes It Cohesive?

Teams exist in all walks of life and in every type of work. The one thing all teams have in common is a purpose that defines their reason for existing. Sports teams exist to win games and championships. Business teams exist to accomplish goals for fulfilling the organization’s mission. In government, teams exist to serve the public. In education, teams exist to promote learning. Community service teams exist to improve local conditions. Artistic teams exist to entertain or enlighten. The purpose of teams is to fulfill a mission more effectively than individuals can when working alone.

Catalysts strengthen the bonds between interdependent roles to create a cohesive whole dedicated to the group’s purpose. Productive collaboration among both generalists and specialists drives team success and the team’s ability to perform at a high level. Cohesion accelerates progress.

Jim Thorne, an experienced human resources leader and consultant whom we interviewed, insightfully observed that “catalysts have relatively low ego needs and a high passion to contribute.” (personal communication, January 21, 2015) Their contributions frequently focus on the greater good for the team and creating a sense of togetherness.

Social scientists have invested heavily in research on team dynamics and group cohesion. Attraction to the group and its members is a contributing factor as is group pride (Hogg, 1992). The bottom line is that group cohesion evolves from a deep sense of “we-ness.” (Bollen & Hoyle, 1990) In practice, cohesion comes from group members’ commitment to work together to complete their shared tasks and accomplish collective goals. These bonds of unity reflect group cohesion (Guzzo & Salas, 1995).

Build on Credibility to Create Cohesion

The second catalytic cornerstone, Creating Cohesion, flows naturally from the establishment of credibility — our first catalytic cornerstone. Without credibility, it’s nearly impossible to develop team cohesion. The process requires leadership and influence. Others follow the lead of those who are trusted — who have shown themselves to have integrity, an optimistic outlook, and the right motivations. Creating team or group cohesion requires strong human connections. These relationships are developed through application of the three competencies encompassed in this cornerstone: