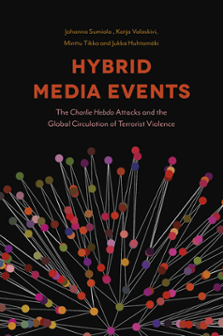 The Charlie Hebdo Attacks and the Global Circulation of Terrorist Violence

The Charlie Hebdo Attacks and the Global Circulation of Terrorist Violence

Johanna Sumiala, PhD, is Associate Professor of Religion and the Digital World at the Faculty of Theology, University of Helsinki. She is an expert in the fields of media sociology and media anthropology, digital ethnography and visual culture. She has recently published articles on mediatized violence and ritualized (online) communication, and she is the author of the book Media and Ritual: Death, Community and Everyday Life (2013).

Katja Valaskivi, Associate Professor (Docent), is the Research Director of Tampere Research Centre for Journalism, Media and Communication (COMET) and Vice Dean of the Faculty of Communication Sciences (COMS) at the University of Tampere, Finland. She is a media scholar, who has published widely in the issues of media and the nation, nation branding and circulation in media society. The title of her most recent book is Cool Nations: Media and the Social Imaginary of the Branded Country (2016).

Minttu Tikka is a PhD Candidate at the Department of Social Research/Media and Communication Studies, University of Helsinki. She is interested in developing methods for studying internet and social media. She has published issues of crises, terrorism and digital media, YouTube and news and digital ethnography.

Jukka Huhtamäki is a Postdoctoral Researcher at Laboratory of Industrial and Information Management, Tampere University of Technology, and at Tampere Research Centre for Journalism, Media and Communication (COMET), Finland. He is also a Co-founder of Innovation Ecosystems Network. He is developing methodology for extracting, analysing and visualizing heterogeneous data for system-level insights on various kinds of socio-technical phenomenon.

This book has many beginnings, but one stands out above all others: the attack on the Charlie Hebdo offices in Paris on 7 January 2015. When news about the shootings began to pour into our social media feeds, we decided straightaway to start compiling research data. We followed the messaging on Twitter and Facebook, we tracked Finnish and international news sources and we witnessed the appearance of the #JeSuisCharlie hashtag.

Charlie Hebdo was not a chance selection, nor were we interested in the event simply because of the huge attention it attracted. We had already been researching attention for many years, exploring the creation and circulation of attention in a changed media environment: we wanted to understand how things, notions, ideologies and values come into being and how they exercise an impact and influence on the media through circulation. We had also studied the ways in which different actors participate in and the roles they had in these circulation processes. Furthermore, we shared an interest in the different ways that religion is thematized in the media. For years, Johanna had followed and studied violent media events, while Katja’s research interest was focused on the global media circulation of different phenomena. Most of this work was grounded in an ethnographic approach, but in this case we wanted to expand and diversify our methodological toolkit. Our ambitious plan, initially, was to collect all the data from all possible sources, to study circulation patterns from one platform to another and to develop methods that combine an ethnographic approach with computational methods. However, we had neither the funding nor the resources to do this.

We, therefore, decided we should assemble a team, start to write funding applications and narrow our perspective. We were joined by Jukka Huhtamäki from Tampere University of Technology, who we had worked with before at the Tampere Research Centre for Journalism, Media and Communication COMET; and by Minttu Tikka, with whom Johanna had collaborated for many years. Throughout the project all of us on the team have shared a common commitment to better understand the changes happening in the media environment and the relationship between media and society in general — and to develop the tools and research methods we need to achieve this understanding. This team effort is still ongoing.

Thankfully the funding we needed came very quickly. First, we secured a grant from the Helsingin Sanomat Foundation in 2015, mainly for our project ‘Je suis Charlie — The symbolic battle and struggle over attention’, which was focused on studying the media attention surrounding the attack on the Charlie Hebdo newspaper. Later, in 2017, the Academy of Finland awarded us funding for a project dealing with the relationship between the media and terrorism more generally. This ongoing project is called ‘Hybrid Terrorizing: Developing a New Model for the Study of Global Media Events of Terrorist Violence (HYTE)’. 1

However, even though we had the funding in place, it was not until six months after the events in Paris that we could start compiling the research data. As it turned out, data collection and data administration became a long-drawn-out rigmarole that went on for almost three years. Once we get the chance, we will report on this in greater detail. Based on what we have heard, colleagues in other countries seem to have very similar problems when it comes to accessing and administering large datasets. The problem is particularly difficult in cases where we have to rely for data on commercial service providers — which we do in order to gain access to social media datasets.

Because we had problems gaining access to historical data and because the volume of data was so huge, we chose to concentrate on messages circulating in Twitter. The dataset was obtained from a company called Pulsar, which specializes in mining and collecting data from different social media platforms. The decision to use Twitter data proved to be a good one, in that Twitter is very much the epitome of the hybrid media environment: it has large amounts of circulating data that are produced in different ways and organized by hashtags. Our decision was driven by practical considerations, even though we were aware that Twitter attracts disproportionate research attention compared to its user numbers. The reason for this lies in Twitter’s technological design, which allows for easy data collection and data transfer in different formats. As well as taking advantage of these technological features, we have collected supplementary data from international online news providers, and to a minor extent from Facebook and YouTube.

The idea for this book was born in 2016, shortly after we had hosted the Tampere ‘Workshop on Media, Event and Social Theory — Transnational Challenges for Analysis’. Feedback from our first project’s advisory board and inspiring dialogue with the invited workshop speakers made us realize that we had tapped into a subject that might well have the makings of a book. We wish to thank the members of the advisory board of ‘Je suis Charlie — The symbolic battle and struggle over attention’: Marwan Kraidy, Gawan Titley, Tuomas Martikainen, Anna Roosvall and Farida Vis for inspiring discussions, feedback and support. In addition, we wish to thank the other workshop speakers: Sabina Mihelj, Andreas Hepp, Peter Hervik, Chris Rojek, Anu Kantola, Risto Kunelius and Nico Carpentier. Nick Couldry had to cancel his attendance at the workshop, but he has always been a constant source of support and help. We’d also like to thank other colleagues who have commented on our work at several conferences, including the members of the ECREA temporary working group on media and religion round-table discussion ‘Media, Religion and Conflict — Contemporary European Perspectives’ in Prague in 2016.

Our thanks also go to Media and Communication Studies at the University of Helsinki; the Faculty of Communication Sciences at the University of Tampere and its predecessors; the Tampere Research Centre for Journalism, Media and Communication COMET; Tampere University of Technology; all our colleagues at these institutions for their support and inspiring discussions; the Nordic Network on Media and Religion and its annual retreat-like gatherings in Sigtuna, Sweden; and the Finnish Institute in Rome (Villa Lante), where Katja had the opportunity to concentrate on full-time writing in March 2017. Thanks also to David Kivinen, Anu Harju and Paula Kallio for their assistance in finalizing the manuscript. We are indebted to our editors at Emerald, Jen McCall and Rachel Ward, whose friendly support and encouragement got us through the final hectic stages of writing. And lastly and most importantly, we owe a special thanks to our family members for their patience and love — and for being there.