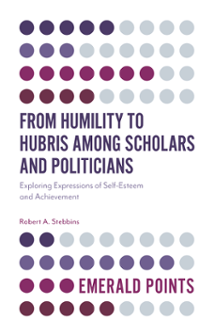 FROM HUMILITY TO HUBRIS AMONG SCHOLARS AND POLITICIANS

Exploring Expressions of Self-Esteem and Achievement

FROM HUMILITY TO HUBRIS AMONG SCHOLARS AND POLITICIANS

Exploring Expressions of Self-Esteem and Achievement 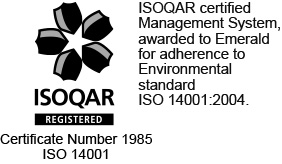 If you told me that I was going to end this book with a warning about the effects of illiberal political manipulation, gullible populations fed up with their government and its politicians, and extremely self-centered, overconfident aspirants for political office, I would have said that you are wrong. This was to be a monograph exploring self-esteem and its roots in personal achievement, nothing more, nothing less. Its conceptual foundation was to be a scale of growing intensity of positive self-evaluation running from modesty to pride to conceit flanked by humility on the left — self-debasing modesty — to hubris on the right — self-promoting superiority forged on past achievement. Politicians and academics would make for a nice comparison, since both types advance in their pursuits by factual analysis and reasoned argument, as applied to practical political problems or as applied to intellectual (i.e., scientific and humanistic) puzzles. In fact, this book did get written as intended, though with a major twist.

Of course, the foregoing statement about the similarity of these two is phrased in ideal terms. In reality, politics and scholarship have never been nearly so cleanly separated. Bertrand Russell explains why: “The opinions that are held with passion are always those for which no good ground exists; indeed the passion is the measure of the holders lack of rational conviction. Opinions in politics and religion are almost always held passionately.” By contrast, the scholarly activities, at their greatest effectiveness, cannot be conducted in this way, since they are essentially dispassionate pursuits of knowledge. So I knew from the outset that scholarship and politics were not always the same, but nonetheless, I thought they would be enough alike to engender some enlightening comparisons. Yet, not until I started writing, early in 2016, did I begin to see more crisply the extent of their divergence.

Beginning early that year I became ever more familiar with the political mess that the Western democracies were sliding into. More particularly, the social context framing the expression of self-esteem and achievement — of humility–modesty–pride–conceit–hubris — was gradually losing its moorings. In the later years, leading up to early 2016, national populist movements began to form around diverse grievances about unwanted immigrants, rising levels of unemployment, widening gaps between rich and poor, sharpening of values distinguishing city and country, increasing threats of terrorist activity, among others. Much of this had already been happening in Europe when Donald Trump’s rise to popularity in the United States in early 2016 proved that such populism was also alive there. What these movements needed to succeed at the ballot box was an attractive leader, one with charisma, antipathy toward the political establishment, and a heavy dose of persuasive hubris.

The contextual part of this study of achievement and self-esteem is framed in discussions of individualism and individuality, big-picture/little-picture thinking, and tolerance and compromise. Conceit and hubris have come to dominate the conversation in contemporary life, and so it is with this book. Humility, modesty, and pride are there in that life (presumably), but they are not seen as interesting news and so fail to appear in the press. Moreover, the analysis that I thought I was embarking had to be rejigged to fit the political and characterological realities of 2016–2017. What started out as an exploration in symbolic interactionist social psychology has wound up also being interpreted on the three analytic contextual levels of micro, meso, and macro sociology and history.

Scientifically, such rejigging is a good thing. This book will show how understanding political and intellectual self-esteem is enriched when viewed in this contextual framework. Analyses of this breadth are rare in the humanities and the social sciences, specialized as they tend to be these days.

Given that hubris is a hot subject in today’s politics, it was critical that this book be published as soon as possible. Fortunately, Alison Lumb (production editor) and Lakshmi Manimaran (copy editor) shared this sense of urgency, but however, avoided turning the project into a “rush job.” Rather, the result was a fine execution of their responsibilities. Many thanks to both of you.