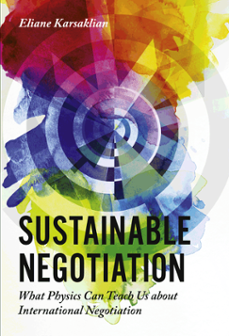 Be a yardstick of quality. Some people aren’t used to an environment where excellence is expected.

When we began this journey together, I’m sure you were rightfully skeptical about this. Now you know there are four key connections:

This Approach to Avoid Conflict May Create It

I’m betting there will be a fifth parallel: that sustainable negotiation — like quantum mechanics — will face a great deal of skepticism from people who are entrenched in the existing approach.

Fisher and Ury, who led the way with Getting to Yes in the 1980s, as well as a host of social scientists such as Hofstede, are to be congratulated for their contributions to this field. The same is true of Newton and the dozens of others who gave us a greater understanding of classical physics, which deals with the movements of large bodies. But, in both cases, the world has moved beyond what they had to offer, and a new model is needed.

Sustainable negotiation isn’t about diplomacy, or resolving conflict. Or getting a deal signed. Or putting a label on an entire culture — and creating an “average person” in it — for the convenience of those who are unfamiliar with it and want to use a short cut. It’s about (1) recognizing that your organization has a need that it can’t meet alone, (2) identifying a partner that can fill that need for the foreseeable future, (3) beginning and sustaining a relationship that will serve all partners well in creating opportunities and building their businesses, and (4) doing this through mutual give and take (rather than forced contract negotiations).

There will be plenty of people ready to tell you this isn’t possible. That cultural differences are too great. That people would rather cheat and deceive in order to win — because that’s human nature. That you can’t have a business relationship that goes on forever. They are either shortsighted, afraid of change, or invested in maintaining the status quo. Don’t let them dissuade you. Einstein was one of the voices against quantum mechanics, but not even he could stem the tide.

You can feel the intuitive truth behind sustainable negotiation. Every time you enter any negotiation and say, “We’re looking for a win/win here,” you know people already are on their guard. They don’t believe you mean this — and probably will look extra closely to see where you are not walking the talk. And they may or may not let you know when they find evidence of this.

You probably have read plenty of books and articles about people wanting to do business with those they know, like and trust: an idea that transcends traditional cultural boundaries. How much more in keeping with this would it be if you started a negotiation by saying, “We aren’t here to sign a contract that comes up for renewal every few years. Instead, we want to start a long-lasting relationship that will allow us to meet our business growth goals — and do the same thing for you as our partner. You are the kind of high-caliber company we wish to work with. We want to see if you’re interested in the kind of relationship that involves regular communication, give-and-take, and sharing best practices that would allow us both to succeed. And we’re willing to spend the amount of time it takes to determine if this is a good fit for both of us.” How would you feel if another partner approached you with that proposition?

Here is your chance to be that groundbreaking negotiator and partner. To propel your organization to greater international growth, and yourself into higher spheres of influence and success. My goal is that this book will give you the understanding behind why you should do this, the exercises to begin exploring the new ideas you’ve learned, and the tools to get going.

Our journey together doesn’t need to stop just because you’re reading the last chapter. I want to hear your questions about sustainable negotiation. The experiences you have while using these techniques. How this is affecting your company and career. Please reach out to me, at www.ubi-orbi.com, so we can continue this conversation and share our respective experiences with other readers.

Thank you for investing this time with me. May you find the information here as life changing as I have.