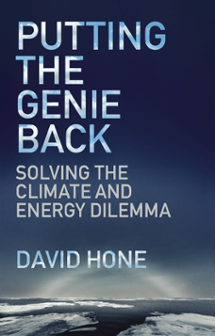 1 Many geologists have noted that humankind is having such an impact on the planet that it is ushering in a new climatic era, taking over from the Holocene.

2 Emissions from human activities such as the combustion of fossil fuels, rather than natural emissions as part of the carbon cycle.

3 Group Climate Change Adviser, located in the Health, Safety and Environment team in the Royal Dutch/Shell Group Corporate Centre as it existed in 2001.

4 The first global deal between nations to try to limit the emissions of greenhouse gases such as carbon dioxide to the atmosphere.

5 Chlorofluorocarbons, used as refrigerants for most of the second half of the 20th century.

6 Natural gas found in remote locations is compressed and cooled to a liquid for shipment to major energy use hubs such as Japan, China and Europe.

8 A big coal-fired power station will be at least 1 GW (gigawatt).

10 When a tonne of carbon is combusted it will form 3.667 tonnes of carbon dioxide, the additional weight coming from the oxygen atoms that are now combined with the carbon.

12 The paper expressed the problem in tonnes of carbon as this is more easily equated to the fossil resource itself (e.g. as coal is largely carbon), but it needs to be multiplied by 3.667 to give tonnes of carbon dioxide as actually emitted to the atmosphere when the fossil fuel is used.

14 A measure of dispersion in a frequency distribution.

20 James Hansen is Adjunct Professor in the Department of Earth and Environmental Sciences at Columbia University. Hansen is best known for his testimony on climate change to congressional committees in 1988. From 1981 to 2013, he was Head of the NASA Goddard Institute for Space Studies.

23 Climate expert says China is a decade ahead of schedule on reducing CO2 emissions. Forbes, July 2016.

25 Carbon dioxide equivalent, i.e. including other greenhouse gases such as methane.

26 Recovery of additional oil from a reserve beyond that originally anticipated when the extraction started. A typical reserve may only yield half the oil that is actually there, but this can be increased with enhanced recovery methods applied later in the life of the field.

30 The Hartwell Paper, A new direction for climate policy after the crash of 2009. Prins et al. Institute for Science, Innovation and Society, University of Oxford. MacKinder Programme, London School of Economics.

32 “The New Lens Scenarios” and “A Better Life with a Healthy Planet” are part of an ongoing process — scenario-building — used in Shell for more than 40 years to challenge executives’ perspectives on the future business environment. Shell bases them on plausible assumptions and quantification, and they are designed to stretch management thinking and even to consider events that may only be remotely possible. Scenarios, therefore, are not intended to be predictions of likely future events or outcomes, and investors should not rely on them when making an investment decision with regard to Royal Dutch Shell plc securities.

It is important to note that Shell’s existing portfolio has been decades in development. While Shell believes the portfolio is resilient under a wide range of outlooks, including the IEA’s 450 scenario, it includes assets across a spectrum of energy intensities including some with above-average intensity. While Shell seeks to enhance its operations’ average energy intensity through both the development of new projects and divestments, Shell has no immediate plans to move to a net-zero emissions portfolio over their investment horizon of 10–20 years.

38 When a company, organisation or individual uses their resources to obtain an economic gain from others without reciprocating a reasonable benefit back to society through wealth creation.

39 Reducing emissions from deforestation and forest degradation (REDD) is a mechanism that has been under negotiation by the UNFCCC, with the objective of mitigating climate change through reducing net emissions of greenhouse gases through enhanced forest management in developing countries.

41 Department of Energy, Government of Botswana.

43 The increased use of an energy service due to its lower cost, e.g. air conditioning, or the use of the same energy for other services due to its release from the initial use it was put to as a result of improved efficiency.

49 Cautionary Note: The companies in which Royal Dutch Shell plc directly and indirectly owns investments are separate legal entities. In this book ‘Shell’, ‘Shell group’ and ‘Royal Dutch Shell’ are sometimes used for convenience where references are made to Royal Dutch Shell plc and its subsidiaries in general. Likewise, the words ‘we’, ‘us’ and ‘our’ are also used to refer to subsidiaries in general or to those who work for them. These expressions are also used where no useful purpose is served by identifying the particular company or companies. ‘‘Subsidiaries’’, ‘Shell subsidiaries’ and ‘Shell companies’ as used in this book refer to companies over which Royal Dutch Shell plc either directly or indirectly has control. Entities and unincorporated arrangements over which Shell has joint control are generally referred to as ‘joint ventures’ and ‘joint operations’ respectively. Entities over which Shell has significant influence but neither control nor jointly control are referred to as ‘associates’. The term ‘Shell interest’ is used for convenience to indicate the direct and/or indirect ownership interest held by Shell in a venture, partnership or company, after exclusion of all third-party interest.

The author may have used certain terms, such as ‘resources’, in this book that US Securities and Exchange Commission (SEC) strictly prohibits Shell from including in its filings with the SEC. US investors are urged to consider closely the disclosure in the Shell Form 20-F, File No 1-32575, available on the SEC website www.sec.gov