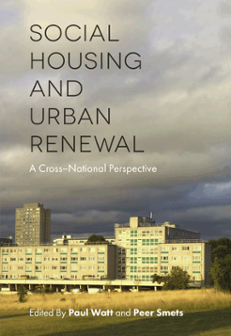 Simone Abram is Reader at Durham University in the Department of Anthropology, and is Director of the Durham Energy Institute. In 2013 she was Visiting Professor at University of Paris 8 and LAVUE (Laboratoire Architecture Ville Urbanisme Environnement), and was a participant in the project “Urban Citizenship: Forms of Engagement and Solidarity” led by Agnès Deboulet. Her work includes several periods of ethnographic research on planning issues (including forward-planning, strategic planning, and regeneration) in the United Kingdom and Norway. Her publications include Culture and Planning (2011), Rationalities of Planning (2002 with Jonathan Murdoch), and Elusive Promises: Planning in the Contemporary World (2013 with Gisa Weszkalnys).

Matthias Bernt has been trained as a Political Scientist and works on the broad field of interrelations between urban development and urban governance, with a strong focus on urban shrinkage and gentrification. He is Research Associate at the Leibniz Institute for Research on Society and Space in Erkner, Germany. Previous positions were at the Helmholtz Centre for Environmental Research in Leipzig and, as a Visiting Scholar, at the Columbia University of New York City and University College London. Bernt is a member of the Editorial Board of the International Journal of Urban and Regional Research, as well as of the Board of the Research Committee 21 on Sociology of Urban and Regional Development of the International Sociological Association. He is Deputy Speaker of the Section Urban and Regional Sociology of the German Sociological Association.

Lynda Cheshire is Professor of Sociology at the University of Queensland, Australia. Her research examines how people live and interact in contemporary local neighborhoods; how structural and policy processes impact upon those neighborhoods and the relationships that play out within them; and the consequence of these changing social dynamics for well-being, social cohesion, conflict, and exclusion. She has undertaken this work in a variety of settings including remote mining areas, rural towns, new suburban estates, and neighborhoods of concentrated disadvantage. She has worked with a variety of industry partners from the public, private, and not-for profit spheres and has published widely in leading rural, housing, and urban studies journals. She is author of Governing Rural Development: Discourses and Practices of Self-Help in Australian Rural Policy (Ashgate, 2006) and co-editor of Rural Governance: International Perspectives (Routledge, 2012).

Cansu Civelek received her undergraduate degree from the Department of Political Science and Public Administration at the Middle East Technical University, Ankara, in 2010. She completed her postgraduate study at the Department of Social and Cultural Anthropology, University of Vienna in 2013. Based on her Master’s research topic, she completed her first video documentary project, “Warning! Karapınar: Voices from an Urban Regeneration” in 2015. Currently she is a PhD student at the same department and she is also a fellow of the Uni: DOCs Fellowship Program of the University of Vienna. Her research looks at the policy-making processes of urban developments in Eskisehir, Turkey.

Agnès Deboulet is Professor of Sociology and Urban Planning. She teaches at the University Paris 8 Vincennes-Saint-Denis, and is co-director of the LAVUE (Laboratoire Architecture Ville Urbanisme Environnement), a research center part of the CNRS and specialized on urban issues. She has co-headed various research programs including “Urban Citizenship: Forms of Engagement and Solidarity” (in Europe) and others in the Middle-East. Her publications include Rethinking Precarious Neighborhoods (dir., 2016), she has also chaired part of the report of metropolis for UCLG in preparation for Habitat III. She is the co-director of 10 books — for example, Rénovations urbaines en Europe, Rennes (with C. Lelevrier, 2014); Savoirs citoyens et démocratie urbaine (with Héloïse Nez 2013); Les Mondes urbains. Le parcours engagé de F. Navez-Bouchanine (with Jole Michèle, 2013); Belleville, quartier populaire? (with R. de Villanova, 2011); Villes internationales entre tensions et réactions (with I. Berry-Chikhaoui and L. Roulleau-Berger, 2007).

Luna Glucksberg is Researcher at the International Inequalities Institute, London School of Economics. She is an urban anthropologist working on socio-economic stratification in contemporary British society. Her current interests are the reproduction of wealth among global elites, considering the roles of two key and so far under-researched actors: family offices and women. Prior to joining the LSE III, Luna gained her degree from UCL and PhD from Goldsmiths, University of London. She then joined the Centre for Urban and Community Research (CUCR) as a Research Associate at Goldsmiths, where she maintains a Fellowship. She sits on an Advisory Board for Transparency International (TI) UK and has contributed to both blogs and national newspaper articles on issues related to the elites.

Aidan Mosselson is Post-Doctoral Research Fellow, employed jointly by the University of Johannesburg and the Gauteng City Region Observatory. His research has predominantly been carried out in inner-city Johannesburg and focuses on the effects market-based solutions have on public space and the accessibility of housing in low-income areas, urban management, and policing practices in volatile neighborhoods, as well as the dynamics of racial transition and emerging forms of belonging in previously racially exclusive areas of South Africa. He has also researched and published on xenophobia and migration in South Africa. He holds a Masters degree in Sociology from the University of the Witwatersrand and a PhD in Social Geography from University College London.

Manuela Olagnero is Associate Professor at the Department of Culture, Politics and Society, University of Turin. Since 2000 she participated to European networks and projects on inequality and social exclusion: EQUALSOC (network of excellence on Economic Change, Quality of Life and Social Cohesion), TSER program BETWIXT (Between Integration and Exclusion), Research Network on “Monitoring Living Condition and Quality of Life in Europe”, financed by European Foundation for the Improvement of Living and Working Conditions. She participated in the evaluation of the Urban Renewal Programs of the Piedmont Region (2001–2004). Her recent research studies concern housing tenure, housing deprivation and poverty in Europe, innovation in housing policies and their effects at local/neighborhood level.

Irene Ponzo is Deputy Director of FIERI (Forum on International and European Research on Immigration), and since its founding in 2004 she has been a member of the IMISCOE Network (International Migration, Integration and Social Cohesion in Europe). She completed her PhD in Comparative Sociological Research at the University of Turin. She has participated in a number of EU-funded research projects as project manager (e.g., Concordia Discors, 2010–2012, European Migrant Integration Academy, 2012–2014). Her main research interests are integration processes and policies, with special regard to the local context.

Javier Ruiz-Tagle has PhD in Urban Planning and Policy from the University of Illinois at Chicago, and is Assistant Professor at the Institute of Urban and Territorial Studies at the Pontifical Catholic University of Chile. He has specialized in topics of residential segregation, housing policies, neighborhood effects, urban sociology, and comparative studies. He has published, presented, and won honors and awards with his work in Chile, the United States, and Europe. His current lines of research revolve around urban political economy and socio-spatial neighborhood change.

Shomon Shamsuddin is Assistant Professor of Social Policy and Community Development in the Department of Urban and Environmental Policy and Planning at Tufts University. He is also Associate Director of the Resilient Cities Housing Initiative (RCHI) in the Center for Advanced Urbanism at the Massachusetts Institute of Technology (MIT). Shamsuddin holds degrees from Brown University (Sc.B.), Yale University (M.Arch.), and MIT (PhD).

Lawrence J. Vale is Ford Professor of Urban Design and Planning at MIT, where he served as Head of the Department of Urban Studies and Planning from 2002 until January 2009. He has taught in the MIT School of Architecture and Planning since 1988, and he is currently the director of the Resilient Cities Housing Initiative (RCHI), a unit of the School’s Center for Advanced Urbanism. He was President of the Society for American City and Regional Planning History during 2011–2013. Vale holds degrees from Amherst College (B.A. in American Studies, summa cum laude), MIT (S.M.Arch.S.), and the University of Oxford (D.Phil.), which he attended as a Rhodes Scholar. He is the author or editor of nine books examining urban design, housing, and planning. Much of Professor Vale’s most recent published work has examined the history, politics, and design of American public housing.

Andrew Wallace is University Academic Fellow in Urban Sociology in the School of Sociology and Social Policy at the University of Leeds. His research looks at housing, regeneration, and the governing of urban change. His first monograph Remaking Community was published by Ashgate in 2010 and reported on residents experiences of urban renewal in inner-city Salford. He has since published in Antipode, City, and the International Journal of Urban and Regional Research.

Paul Watt is Reader in Urban Studies in the Department of Geography at Birkbeck, University of London. He has published widely on urban topics including social rental housing, urban regeneration, the London housing crisis, gentrification, suburbanization, and the London 2012 Olympic Games. He is co-author with Tim Butler of Understanding Social Inequality (Sage, 2007), co-editor with Peer Smets of Mobilities and Neighbourhood Belonging in Cities and Suburbs (Palgrave Macmillan, 2014), and co-editor with Phil Cohen of London 2012 and the Post-Olympics City: A Hollow Legacy? (Palgrave Macmillan, 2017). He sits on the Editorial Board of City, and is Board Member of the Research Committee on Sociology of Urban and Regional Development (RC21), International Sociological Association.