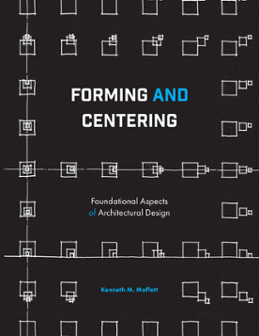 This figure was developed independently of this book. It represented an attempt to relate the basic orders that appeared in a career niche market of exposition park and fairground planning and design. Each named figure in the upper ring was discernable as the basic order of numerous plans, which were designed before any such attempt had been made to find some sort of overarching sequence of types. The projects that embody the figures responded to the usual suspects: existing conditions, site, cultural and environmental context, program, client, budget, et al. This circle of ideograms, with its intermediate “morphing” figures, illustrates a closed continuum of types.

The second copy of the figure replaces those titles with the names of corresponding centering types that have been discussed in this narrative. Several features are of interest, particularly the directness with which an involution of the void shell, via converging spirals, transitions to the “opposite” pole of the full radial array.